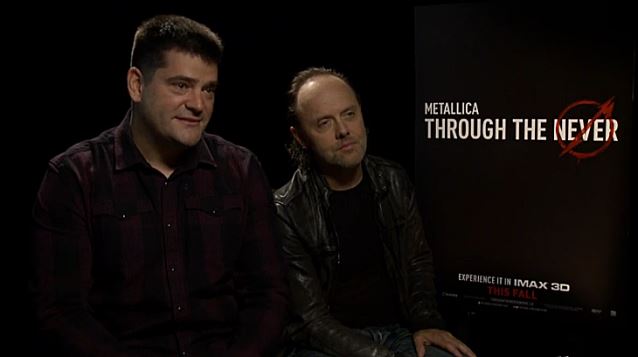 METALLICA's new movie, "Metallica Through The Never", made its world premiere Monday night (September 9) at the 38th annual Toronto International Film Festival. The film, a blend of concert movie and fictional narrative, stars Dane DeHaan as a member of METALLICA's road crew who is sent on a mysterious mission while the band performs at a sold-out arena and events outside grow more bizarre.

Video footage of METALLICA drummer Lars Ulrich and director Nimród Antal talking to Tribute.ca about the movie can be seen at this location.

METALLICA bassist Robert Trujillo told The Pulse Of Radio that the idea for a METALLICA concert film had been around for a while, but that the band wanted it to have something extra. "We felt that the missing ingredient was obvious to us and it was some sort of narrative," he said. "There needed to be something that co-existed with the music, so it goes beyond just another concert performance. So we took it a step in a different direction, kind of taking a page from PINK FLOYD 'The Wall' or 'Song Remains The Same' by LED ZEPPELIN, somehow creating our own version of that. And really it was trial and error."

The 3D IMAX film will also play at Fantastic Fest in Austin, Texas several days before it opens in limited release on IMAX screens around the country on September 27. The film will then expand to more theaters on October 4.