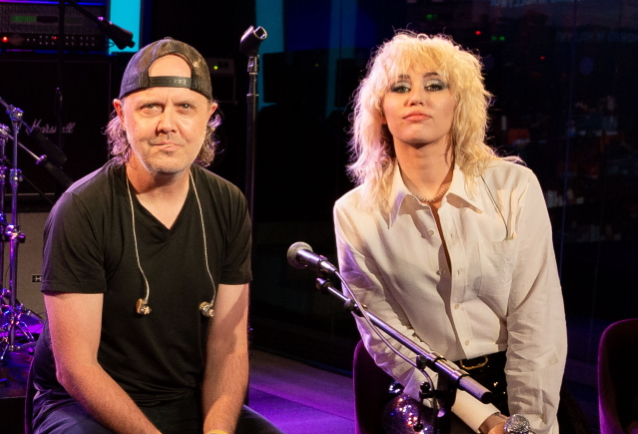 Multi-platinum-selling recording artist, songwriter and trailblazer Miley Cyrus graces the cover of Interview for its Fall 2021 issue. Photographer Brianna Capozzi captured Miley, dressed in Gucci — a partner of Miley's — with a subtle nod to R Crumb's heroines in a fantastical setting on the grounds of the Cyrus family ranch in Tennessee.

Keeping within Interview's theme of celebrities interviewing celebrities, the cover is anchored by Miley's conversation with Lars Ulrich of METALLICA. In the interview, which can be read in its entirety at InterviewMagazine.com, Miley opens up about identity, growth and opines on "Plastic Hearts", the return to live performance and their collaboration on "Nothing Else Matters" for METALLICA's tribute album "The Metallica Blacklist".

Interview's Fall 2021 issue can be found on newsstands now.

METALLICA performed "Nothing Else Matters" with Cyrus on SiriusXM's "The Howard Stern Show" on September 9. You can watch video of the performance below.

Miley told Ulrich she decided to first perform "Nothing Else Matters" in 2019 at England's Glastonbury festival for a very special reason.

"I have two notebooks that I take everywhere I go," she said. "One of them is filled with my morals, my values, my purpose, my potential, my capabilities, and my commitments — to others, and to myself. I'm constantly writing things in there. Recently, I wrote down something very wise that I heard, which is related to your question. It was about how lyrics are one of the most resonant aspects of a song, and of why an audience connects with a song. It has to do with the words, and to challenge that is to say that there's no difference between lightning and a lightning bug. But there's a big difference. When I think about the sentiment behind 'Nothing Else Matters', it aligns completely with my morals and my values. When I listened to 'Nothing Else Matters', and I knew that I was confirmed for Glastonbury — I actually have chills talking about this — it was the only song that I could imagine playing."

Miley previously told Howard Stern the Glastonbury festival came during a pivotal moment in her life.

"It was right before actually that the world knew I was getting a divorce, but I knew that I was," Miley said. "I had just lost my house in the fires … I was so heartbroken and my purpose was coming from this performance. I got sober at that time. I really pulled my fucking shit together. This song ['Nothing Else Matters'] was what drove me to that place."

"My life in regards to love was falling apart, but I had my love for music," she added.