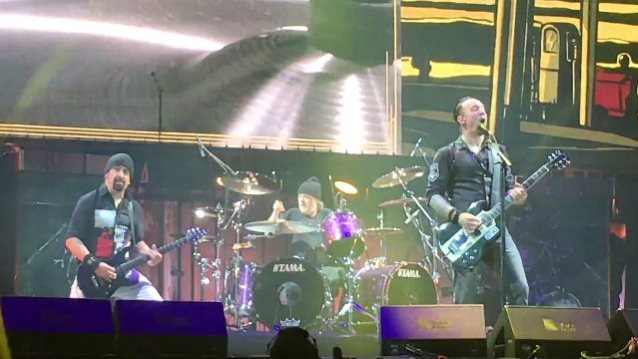 Danish/American rock 'n' rollers VOLBEAT were joined by a slew of special guests — including METALLICA's Lars Ulrich, KREATOR's Mille Petrozza, NAPALM DEATH's Mark "Barney" Greenway and Canadian musician Danko Jones — during their headlining appearance Saturday night (August 26) at Telia Parken in Copenhagen, Denmark. A sold-out crowd of forty-seven thousand witnessed the concert, which saw Ulrich sitting in with VOLBEAT on the band's song "Guitar Gangsters & Cadillac Blood" as well as an electrifying rendition of METALLICA's "Enter Sandman". Meanwhile, Petrozza, Greenway and Jones — all of whom have guested on VOLBEAT's recordings in the past — reprised their roles on the tracks "7 Shots", "Evelyn" and "Black Rose", respectively.

METALLICA and VOLBEAT have played together a number of times in recent years and have shared North American management since early 2015.

VOLBEAT was the opening act on most of the recently completed North American leg of METALLICA's "WorldWired" tour.

In a 2014 interview with ARTISTdirect, VOLBEAT guitarist/vocalist Michael Poulsen said that touring with METALLICA was a dream come true.

"We have been huge fans of METALLICA since we discovered heavy rock," he said. "They're the biggest heavy rock band in the world. Nobody will ever be able to top them. They're almost as big as Coca-Cola. [Laughs]

"Rewinding back, you remember being in your room at your parents' house with all the posters. I had METALLICA posters up even before I had my first guitar.

"Now that we've been on the road with them and become friends with them, it's a great accomplishment, and I'm so proud of it.

"I think it was in 2007 when we first met them. METALLICA hadn't been in Denmark for a long time. They were about to play a show in an open field in front of 40,000 people. They were looking for support bands. Lars [Ulrich, METALLICA drummer] was calling friends and media asking them, 'What's the big buzz right now?' Everybody was talking about VOLBEAT. We had our second album out. He checked it out, liked what he heard, and we got the support slot that day. James Hetfield [METALLICA frontman] became a VOLBEAT fan!

"After that, we've been on the road lots of times with METALLICA in America, in Europe, and playing on their own festivals like Orion Music + More. We've hung out with them and gotten invitations to their shows. It's been amazing. They're such nice guys. There are a lot of big bands who could learn a trick or two from METALLICA about how to treat people. They're so nice. They're truly gentlemen. They've got a good crew, and it's inspiring to see how they work. They're so professional and still very dedicated.

"It was an honor and a great experience to go out with them. It just shows nothing is impossible. Dreams are there to come true. That was definitely one of them." 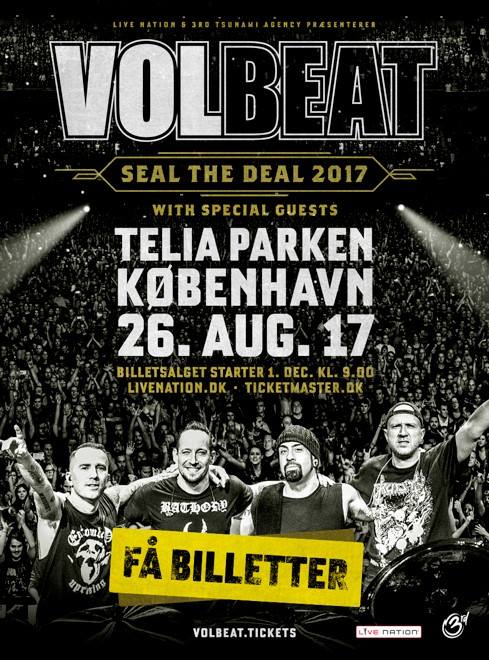