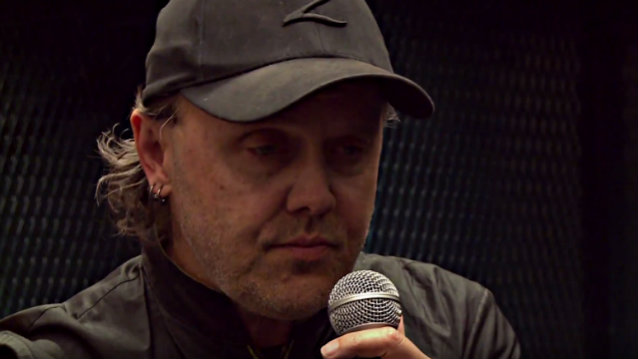 METALLICA's LARS ULRICH: Response To 'Hardwired' Album Has Been 'Way Beyond Our Wildest Hopes And Imaginations'

HardDrive Radio host Lou Brutus conducted an interview with METALLICA drummer Lars Ulrich before the band's May 12 concert at Lincoln Financial Field in Philadelphia, Pennsylvania during the "WorldWired" North American stadium tour. You can now watch the chat below. A couple of excerpts follow (transcribed by BLABBERMOUTH.NET).

On how the overwhelmingly positive response to METALLICA's new album, "Hardwired… To Self-Destruct":

Lars: "I was telling somebody earlier, I've heard a phrase in the last six months that I've never heard before in my life ever in thirty-five years in a rock and roll band, which is, 'Why didn't you play more new songs tonight?' Usually, it's, like, 'Why are you playing so many [news songs]? Why are you playing the whole new album? Play more old stuff. Play more old stuff.' That's kind of the mantra that you hear when you're a musician these days. And on the back of this record, we've played four new songs, we've played five new songs, there was a couple of shows where we played six new songs — half the record — and still people come [to us and say], ''Cmon, where's 'Spit Out The Bone'? Where's so and so? Where's this? Play more new songs.' And it's, like, dude, we're just getting started. We're six months into this dance, and we've got lots of touring left. And we're just getting, like I said, our feet wet. I think we've played seven of the twelve songs, and we've got five to go. And, obviously, what seems to be like a fan favorite, like 'Spit Out The Bone', we'll get to all of it. I don't think introducing 'Spit Out The Bone' in a stadium [would be the right thing to do]. That's a pretty deep song. I think that may work better in an arena or whatever. But, listen, the fact that the fans have embraced this record at the level that they have, the fact that people wanna hear more, and the fact that we feel comfortable enough to go out and open a stadium show with new songs is kind of a testament to how awesome this record's been received — I mean, way beyond our wildest both hopes and imaginations. So it's been truly kind of… People are sitting there going, 'It's your best record since the 'black' album.' Some people are saying it's the best record ever. I mean, hearing that stuff thirty-five years into a career, it's kind of crazy. Because there's this thing in the music business about, 'The best days are behind us,' and when you still get a chance to challenge that, it's an awesome thing, especially when it happens as organically as this whole thing did. So we're very appreciative, and it's a really cool time in METALLICA right now."

On why he thinks "Hardwired… To Self-Destruct" has been received so well by the METALLICA fans:

Lars: "Man, I've been asked that question a lot in the last six months. I mean, there's not one soundbite answer — there's a whole pile of factors. I think the great unsung hero in this whole record, in this endeavor, has been [producer] Greg Fidelman. He has been our… basically, our sound guy, our engineer, our go-to guy for everything since [2008's] 'Death Magnetic', and he's been… I think he's finally tweaked our sound and figured out exactly what our M.O. is and how we function the best, both in terms of the studio and in terms of how we should sound and how he gets not only the performance but the sounds and the sonics and all that. So I think he has a lot to answer for. And, you know, obviously, these songs are maybe slightly less progressive and a little more groove-oriented and maybe slightly more cohesive in a way. So that's probably a little part of it. And you can never discount the… without getting too crazy here, you can never discount the energies of the universe and how things are aligning and the right record at the right time. If this record came out two or three years ago, maybe it wouldn't have been received [as well]. Do you know what I mean? There's something about the musical landscape — what everybody else is doing, how your record correlates to what everybody else is doing and so on. So it's a lot of those factors. And, of course, our charm and our good looks. [Laughs] It worked out. I mean, what the fuck? Thirty-five years in, some of it works out, some of it doesn't work out. We always do our best, as you know, and this one we just nailed. So it's… Like I said, it's a good time."

The North American leg of METALLICA's "WorldWired" 2017 tour kicked off on May 10 in Baltimore, Maryland and is hitting stadiums in 25 cities before winding down in mid-August. Support on the quartet's first North American trek since 2009 is coming mainly from AVENGED SEVENFOLD and VOLBEAT, with GOJIRA taking over for the latter group for the last six shows.