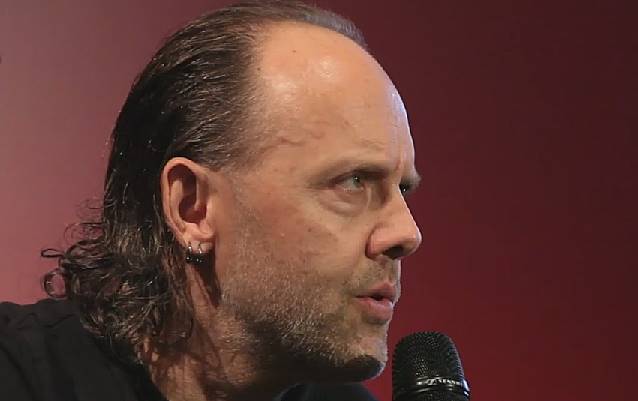 According to The Pulse Of Radio, METALLICA drummer Lars Ulrich revisited one of the most controversial eras of the band's career in a Reddit "Ask Me Anything" session last weekend, tackling a question about the band's infamous lawsuit in 2000 against the Napster file-sharing service. Asked whether he regretted the legal battle with the company, which effectively drove Napster out of business, Ulrich said he did not, adding, "I do find it odd how big of a part of our legacy it has become to so many people, because to me it's more like a footnote."

At the time 14 years ago, Ulrich told The Pulse Of Radio that the Napster battle was not about getting money for the band's music, but about having control over how it was shared. "All we want as an artist is a choice," he said. "There's nothing to argue about that. Nobody has the right to do with our music whatever they want. We do. We're saying as much as the next band want to work with Napster, we have the right not to."

His views on the subject today have not changed, with the drummer saying in the "Ask Me Anything" session, "The whole thing was about one thing and one thing only — control. Not about the Internet, not about money, not about file sharing, not about giving shit away for free or not, but about whose choice it was. If I wanna give my shit away for free, I'll give it away for free. That choice was taken away from me."

Napster was launched in 1999 as a pioneering, easy-to-use peer-to-peer file sharing service that was used mainly by music fans trading songs and albums in the MP3 format.

At its peak, the service had 80 million users and provided the template for later services like Limewire, Grokster, Gnutella and many others. Its success arguably began the end of the "album era" in popular music and sent the music industry into a tailspin from which it has never fully recovered.