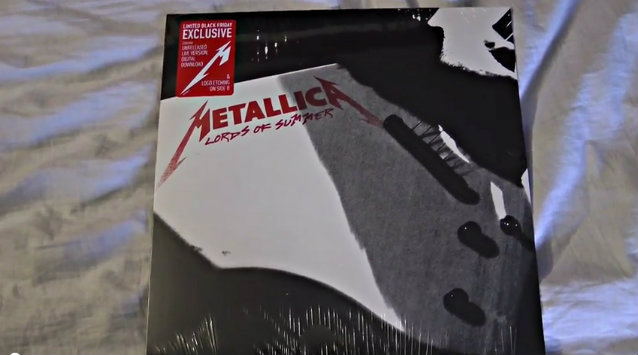 On Black Friday "Record Store Day," November 28, METALLICA released a limited-edition 12-inch vinyl of "Lords Of Summer". Side A features the "First Pass" (studio) version of the new song "Lords Of Summer" as well as a previously unreleased live version recorded at the Rock In Rome Sonisphere festival on July 1, 2014. Side B features a laser etching of the METALLICA "M" logo. This collectable vinyl is only available through independent retail and Metallica.com.

A six-minute video overview of the limited-edition 12-inch vinyl of "Lords Of Summer", courtesy of Vinyl-Blog.com, can be seen below.

METALLICA earlier in the year completed a tour where the band played a nearly all-request set, with 17 songs chosen online by fans prior to each gig and the last slot filled by "Lords Of Summer".

METALLICA drummer Ulrich Ulrich told RollingStone.com that "Lords Of Summer" "is fairly representative of where our creative headspace is at right now. It's one of those things that's like, 'Here, we're writing and we're creating.'" However, according to guitarist Kirk Hammett, even that track is still being refined.