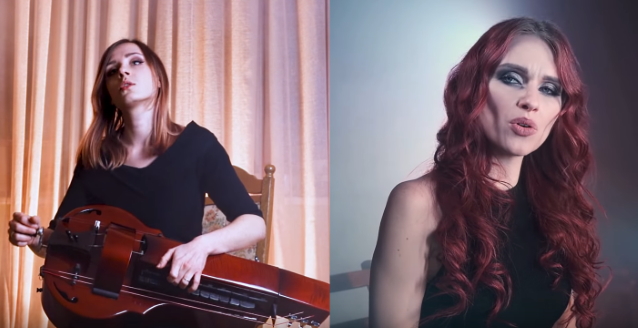 METALLICA's 'Nothing Else Matters' Gets Hurdy-Gurdy Treatment From ELUVEITIE Members

Polish hurdy-gurdyist Michalina Malisz, who has been a member of the Swiss folk metal band ELUVEITIE since 2016, has released her cover version of the METALLICA classic "Nothing Else Matters". The official video for the track, which features a guest appearance by her ELUVEITIE bandmate Fabienne Erni, can be seen below.

Malisz has been blending the sound of the hurdy-gurdy with her favorite genres: metal, Celtic and cinematic music. Her previous covers include songs from IRON MAIDEN, SYSTEM OF A DOWN and NIGHTWISH.

According to Wikipedia, the hurdy-gurdy is a stringed instrument that produces sound by a hand crank-turned, rosined wheel rubbing against the strings. The wheel functions much like a violin bow, and single notes played on the instrument sound similar to those of a violin. Melodies are played on a keyboard that presses tangents—small wedges, typically made of wood—against one or more of the strings to change their pitch. Like most other acoustic stringed instruments, it has a sound board and hollow cavity to make the vibration of the strings audible. Most hurdy-gurdies have multiple drone strings, which give a constant pitch accompaniment to the melody, resulting in a sound similar to that of bagpipes.