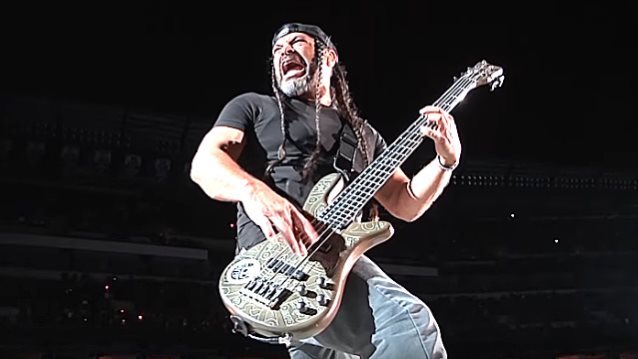 METALLICA bassist Robert Trujillo paid tribute to Chris Cornell by working in a snippet of SOUNDGARDEN's classic song "Black Hole Sun" into his bass solo during the former band's concert Friday night (May 19) at the Gillette Stadium in Foxborough, Massachusetts. Check out video footage below.

According to CNN, the SOUNDGARDEN frontman will be laid to rest on May 26 in Los Angeles. His body will be flown from Michigan to Los Angeles on Sunday, and the singer will be buried at the Hollywood Forever Cemetery.

A source told CNN: "The family is thinking about a [public] memorial for fans, but is coping now with their loss and the funeral service."

The family's attorney, Kirk Pasich, said in a statement that the family would await the toxicology results to see if Ativan — the anti-anxiety prescription drug Cornell was taking — or other drugs contributed to his death.

"The family believes that if Chris took his life, he did not know what he was doing, and that drugs or other substances may have affected his actions," Pasich said.