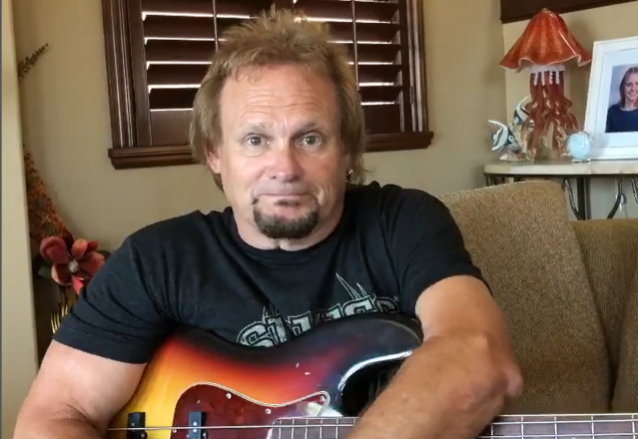 Michael Anthony has weighed in on reports that he has been in discussions with David Lee Roth and Alex Van Halen about taking part in an all-star VAN HALEN tribute project.

The former VAN HALEN bassist addressed the rumor nearly two months after former METALLICA bassist Jason Newsted revealed to The Palm Beach Post that he was approached by the VAN HALEN drummer about six months earlier about playing bass for the project. Newsted told the Florida newspaper that he agreed to go to California to jam with Alex and legendary guitarist Joe Satriani and see if it felt right, but he eventually realized that it would be impossible to do justice to VAN HALEN's legacy. "How could you?" Jason said. "There's nobody that can top it, so how do you show it honor? I didn't want it to be viewed as a money grab. And then it kind of just all fizzled."

During an appearance on Thursday's (June 2) episode of SiriusXM's "Trunk Nation With Eddie Trunk", Anthony confirmed that he was involved in some of the early conversations about the VAN HALEN tribute.

"I haven't spoken to him in a little while, but I have spoken with Alex on occasion," Michael said (as transcribed by BLABBERMOUTH.NET). "And for the most part, we don't even speak that much about music — more about just family, how we're doing and stuff like that. I know it still pains him a lot as far as Eddie [Van Halen; late VAN HALEN guitarist and Alex's brother] goes and will probably for the rest of his life. But I spoke with him and Dave last year about a possible something, but Dave just starts going [talking really fast] And I'm, like, 'Okay.' And we basically just had kind of a conference call about having a conference call to discuss it, and then that other call didn't happen for whatever reason on their end. I told them that I'd obviously be interested. And it would be more like a celebration of the music rather than putting together something and calling it VAN HALEN because that just wouldn't be right at this point."

Anthony went on to say that he hadn't been aware Newsted was involved in the discussions until Jason disclosed it in The Palm Beach Post interview. "That's the first that I'd even heard about anything like that," Michael said. "And it was kind of interesting because he said he spoke to [Dave and Alex] about a year ago, and that's about the time I was speaking with them. So I don't know. I'm gonna have to call Jason and ask him. [Laughs]"

When host Eddie Trunk noted that Roth said in his comment about the VAN HALEN tribute that "two of us" would be required "for every position" in the project's lineup, possibly suggesting that more than one guitarist and more than one bassist would be involved in the show, Anthony said: "I was kind of thinking along those lines also, but then one thing made me kind of change my mind and make me think, 'Well, Dave's just kind of being Dave,' and maybe he's just saying that it would take at least two people to be able to duplicate what one person in this band did, and the reason I thought of that was all of a sudden he brought up the name Pink. He was saying that Pink would have to be one of the David Lee Roth characters, or singers, and I'm, like, 'Huh.' That just sounded a little too 'Dave' to me.

"But I don't know," Anthony quickly clarified. "At this point, I've gotta tell you, I don't know if anything will ever happen. 'Cause Alex is — he's really hurting. Him and Edward were so close on all levels — musical levels and personally and whatever. It just seems to me like it might be really hard for Alex to even enter into something to bring back all those memories. I don't know. I could be wrong. I'm the guy that always says, 'Never say never.'"

According to Anthony, the proposed VAN HALEN tribute would likely take the form of a single concert rather than a full-fledged tour.

"What was being talked about was not actually doing a tour," he said. "You take something like this on tour and people are gonna think it's a cashgrab. I'd rather have something, like a memorial-type thing, done at a venue. And there were actually a couple of venues discussed. But do it that way instead of taking it on the road. And make it just a real celebration of the music…

"I actually would not be up for doing a tour right off the bat," Michael continued. "I think holding a celebration of Eddie and the music and the whole VAN HALEN legacy is great. And let's face it — none of us need the money. I don't need the money. I'd rather take the money and throw it in a charity."

Michael once again reiterated that he has no concrete idea whether any VAN HALEN tribute concert will take place. "I think it all really hinges upon Alex," he said. "And he's gotta be the person, really, that wants to do this and give his blessing to the whole thing for it to move forward. And like I said, when we speak, we really don't even speak about doing anything like that at this point. He's still healing. And if it gets to that point, I'm sure Alex will be the first one that'll wanna do something like that."

Asked whether there has been any bad blood between him and Alex and Dave in recent years, Anthony said: "Not at all. I only spoke to Dave that one conversation we had last year and I couldn't hardly get a word in edgewise, which is… that's typical Dave. But I have spoken to Alex on occasion, and it's great. We'll speak for, like, 45 minutes, an hour. And probably about the first 20 minutes is Alex, sometimes he'll vent to me a bit about all the circumstances around how everything happened with Eddie. But we basically just talk about family and we actually bring up some of the old times on the road, to lighten things up a bit."

Last June, Eddie Van Halen's son Wolfgang Van Halen, who joined his father in VAN HALEN for the band's 2007 reunion tour with Roth, replacing Anthony, told SiriusXM's "Trunk Nation With Eddie Trunk" it would be "great" to eventually organize an Eddie Van Halen tribute show. "It's not in the immediate plans, 'cause that's a lot of moving parts that you've gotta corral to get that to happen. But I definitely think it should happen. Absolutely," he said.

"I have nothing to do with the [Eddie Van Halen] legacy," he said. "That's their business — that's Wolfie, Alex Van Halen; they're family members. Whoever wants to call me up and say, 'Here's the date,' I will be there. I don't care where I am. I'll cancel a [solo] show [if I need to]. [Laughs] [That's] something VAN HALEN would never do. I always make that joke — canceling a show was [out of the question with] VAN HALEN. I went out sick without being able to sing, Eddie went out with a crutch, Alex went out with a fucking neck brace — we wouldn't cancel shows. But I will cancel my show for a tribute to Eddieany day."

#ICYMI on #TrunkNation - @EddieTrunk spoke to #MichaelAnthony about the #CHLA charity walk and then got into the rumored @VanHalen tribute tour clarifying what conversations are actually happening. Catch the replay at 10pET or anytime on the @SIRIUSXM app: https://t.co/Sbdq09EEUipic.twitter.com/XasLwpJIK6