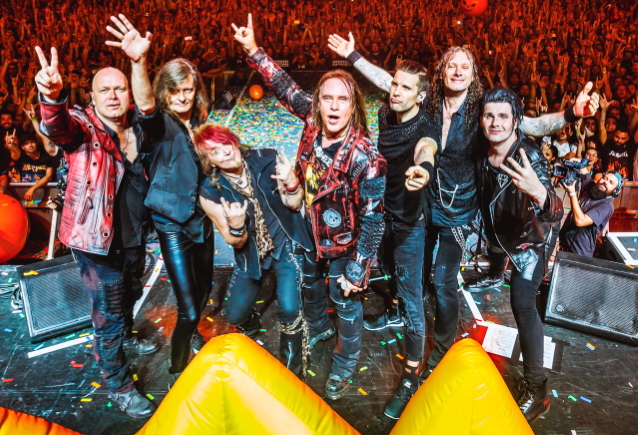 HELLOWEEN singer Michael Kiske spoke to Chile's Radio Futuro about the overwhelmingly positive response to the band's self-titled effort, which came out last year. He said (as transcribed by BLABBERMOUTH.NET): "That was pretty unexpected. I was expected it to do good, but it was, like, perfect.

"It is very difficult for you, when you're involved in an album, to have an objective view at what you're doing," he explained. "You just do what you do. You always try to make the best out of every song. And obviously the spirit within the band is very good, which helps, but you never know how people hear it. So the best thing you can do is fade it all out, not think about it, and just try to make every song exciting for yourself; that's the best thing you can do. The less you think about success or how critics might see it, the better for the album. It's not easy, but you've gotta have that discipline to kind of fade it out and not let it get to you.

"I was surprised how well it was received, but, of course, it was a very welcome motivation, especially last year," Kiske added. "We released it right in the middle of the whole pandemic crap, and that was a positive lift, doing the interviews and seeing how people reacted to it."

Regarding how HELLOWEEN has managed to pull off the seemingly impossible by splitting vocals on the album between returning singer Kiske and longtime frontman Andi Deris, with added contributions from guitarist/vocalist Kai Hansen, Michael said: "It was actually great. It was very easy. I was kind of expecting it to be difficult, but it wasn't, because there was no ego fights going on between me and Andi. We were just there on Tenerife meeting up almost every day.

"Before we started recording, we had Dennis Ward making a rough draft of what he thinks could work in terms of splitting: 'This sounds like Andi. This sounds a bit like Michael.' And that was how we approached it. It was some kind of pre-draft of how we could do it, but was nothing written in stone.

"One day I came to the studio and the evening before Andi was recording something, or had recorded something, and he wasn't feeling so happy with it. He came and said, 'I was trying this and that. And maybe you should give it a try too.' And then we figured out what sounds the best for the song.

"There are a whole bunch of songs where you can hear right away, 'That's an Andi Deris song. He should sing that.' Or, 'That's a typical Kiske song. That sounds great [with Kiske vocals].' It's like 'Angels', for instance, it was very clear that that was mostly a Kiske song, and Sascha [Gerstner, guitar] had written it with my voice in his head. But there are other songs, especially when Andi writes his own songs, usually it sounds best when he does it unless he wrote it with my voice in his head, like he did with 'Fear Of The Fallen'. 'Fear Of The Fallen', he was writing it with both singers in his mind, and that works out.

Upon its release in June 2021, "Helloween" landed in the Top 10 in more than 10 countries, including Germany, Spain, Finland, Sweden, Switzerland and Austria. The cover artwork for the LP was painted by artist Eliran Kantor, who has previously worked with HATEBREED, SOULFLY, TESTAMENT, ICED EARTH and SODOM, among others.

Produced by Charlie Bauerfeind and Dennis Ward, the latest HELLOWEEN LP was recorded in part at the H.O.M.E. Studios in Hamburg (where everything started in 1984). The same recording console used for such HELLOWEEN albums as "Master Of The Rings", "Time Of The Oath" and "Better Than Raw" was utilized to record the band's new material. The effort was mixed at the Valhalla Studios of Ronald Prent (IRON MAIDEN, DEF LEPPARD, RAMMSTEIN).

"Helloween" saw the legendary German power metallers going "back to the roots," with the band recording fully analogue and Daniel Löble playing the drum kit previously used by HELLOWEEN's original drummer, the late Ingo Schwichtenberg, on the legendary "Keeper Of The Seven Keys" recordings.

Earlier this year, Deris told the "Metal Command" podcast that he "strongly" hoped the reunited expanded classic lineup of HELLOWEEN would eventually make another album to follow up "Helloween". "I mean, as long as the vibe is great, chemistry is great and everybody's having fun with each other, it would be a crime not to do so and not to plan for a future together," he said.

On the topic of how HELLOWEEN has managed to maintain internal harmony with so many members involved, Andi said: "I just can tell you getting along with each other, I think it's rooted in the matter of fact that we're finally too old for the other shit. [Laughs] From a certain age on, you let other people live and you don't take everything personal. Talking for [myself], whenever somebody told me something that could be looked at in a negative way, I took it the negative way. Even though when you look at it from the positive side of you, you could say, 'Well, man, maybe it was even a compliment, because have you seen it from that side?' 'No.' That's what happens when you're getting older — you don't take everything on the negative side: 'Oh, he's attacking me' or 'he's meaning bad' or 'he's meaning to annihilate you or intimidate you' or whatever. Everybody in the band, even together now with seven people, I have to say everybody is old enough to not always look at it from the negative [point of view] but also try to realize who's talking. So I cannot imagine that the boys are meaning bad if they speak about me in a sense that I could take negatively, but because I like everybody, I personally think, 'Well, I don't think they're talking negatively.' So I try to find the sense in a positive way, and most of the time — 99.9 percent [of the time] — it's exactly that. It's nothing negative; it's positive. But back in the day, everything I took was negative — when I was in my 20s and 30s. Then when you get [to] 40, it's getting better. [Laughs] Or maybe it's just you don't give a shit anymore."