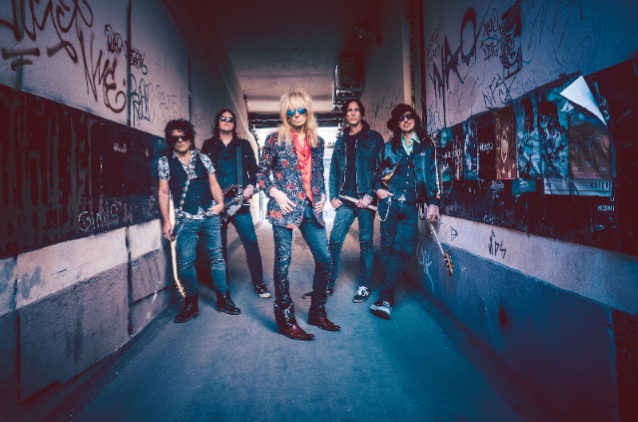 Michael Monroe has released a music video for the majestically dark single, "Derelict Palace", taken from the album "I Live Too Fast To Die Young", out now via Silver Lining Music.

"'Derelict Palace' is about watching someone that you care about disappear into drug addiction," guitarist Rich Jones explains. Musically, the track takes on a melodic, somber tone. "I had been listening to a lot of post-punk when I wrote it — ECHO & THE BUNNYMEN, PSYCHEDELIC FURS, THE CHURCH — and I wanted to see if we could push the band in that kind of musical direction," adds Jones.

The single is aptly accompanied with an eerie-yet-mesmerizing video showing the band performing in a desolate, gothic, manor house, including scenes of Monroe flicking a switchblade knife gifted to him recently in Milan by none other than Alice Cooper himself.

Monroe adds: "The song was written about people who get a little too into drugs and before you know it, they kind of disappear from all of the people and things that they used to love. Of course, that's sad, but that said, there's something cool about being an outcast and not fitting in…

"This is one of my favorite songs off the 'I Live Too Fast To Die Young' album and it adds a nice new dimension to my band's sound and style. Plus, we found the perfect place to film the video for it."

Regarding the musical direction of "I Live Too Fast To Die Young", Monroe said: "The punk is always gonna be there — it's part of my thing and our sound — and overall I think we've really renewed the band's sound in the best possible way without getting away from who and what we are."

He continued: "I always wanted to maintain the excitement and curiosity of life, to keep that mind of a child and excitement about stuff and not get complacent, not get tired. Of course, I can be cynical and I'm sarcastic, and I haven't had the best of luck, but then again who does? And I still have a lot of things to be happy about. It doesn't take much for me to be happy. To be able to do what I love doing the most, and make a living out of it, that's a gift."

Monroe, the gargantuan, gregarious, glamorous rock 'n' roll God who struts and fronts it with the same power and panache he first thrust our way leading HANOI ROCKS all those years ago, does not try to be a philosopher, but goddamn, he projects like one. Throughout "I Live Too Fast To Die Young", Monroe tells tales of glory and observed stories, some pretty, some shitty, but all through a lens of eventual optimism, hope and a sense of dirty, cheeky late-night fun. Monroe's lens has always been directed towards the upside, even after the greatest downs a man can suffer, and the sheer power of his positive energy infuses everything he comes into contact with.

The eleven lean, mean, raw power rock 'n' roll songs which make up "I Live Too Fast To Die Young" see Monroe swagger the streets like a rock-punk poet, a storyteller who's seen it all from the hellholes of Helsinki to the late-nights in London's St. Moritz with some trashy times in Tokyo to boot. Warm, funny, occasionally sad but ultimately upbeat, "I Live Too Fast To Die Young" brings the listener into the heart and soul of its creator.

The title track, "I Live Too Fast To Die Young", is quintessential Monroe, playing with words and concepts in a playfully irreverent way and wrapping it all up in some proper 'fuck you' rock 'n' roll. A close friend of Monroe's, Slash from GUNS N' ROSES, throws down some lead guitar on the track.

Recorded at Inkfish Studios in Helsinki, Finland between November and December 2021 and produced by the band with engineer Erno Laitinen, the album features Monroe on lead vocals and harmonica, Steve Conte (guitars and vocals),Rich Jones (guitar, vocals),Karl Rockfist (drums) and Sami Yaffa (bass/vocals/guitar).

With "I Live Too Fast To Die Young", it is clear Michael Monroe is striding into the summer with a triumphant — and perhaps most importantly, defiant — roar to offer you a chance to let your hair down (or up!) and to once again enjoy the freedom of joyous celebration and expression.

"We're entertaining, we all want people to have a good time, but you don't have to switch your brain off to dance and have a good time," concluded Monroe. "Fight boredom, fight normalcy, fight against what you're told, what you're supposed to do, be, or say. It's about letting yourself be yourself and no apologies, about having no regrets."

"This album has a great combination and balance of songs, and the collection tells a great overall story," said Monroe. "It has a lot of color and energy, and, of course, it is rock 'n' roll, but punk is also always going to be a part of who we are; that will never die." 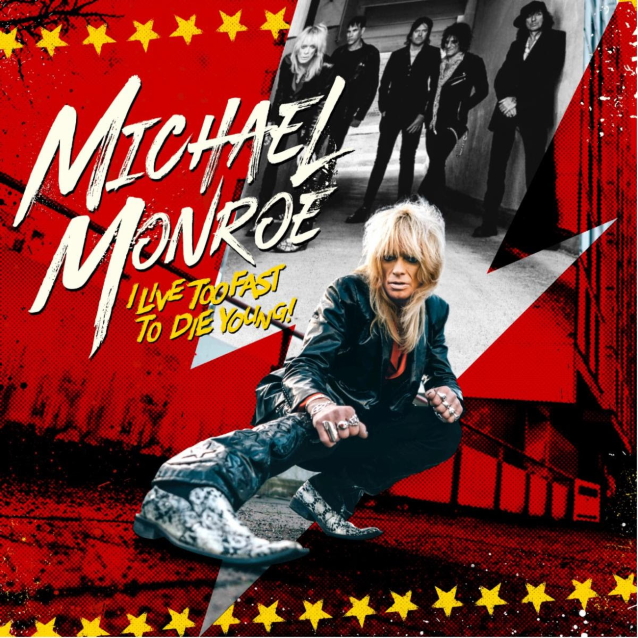