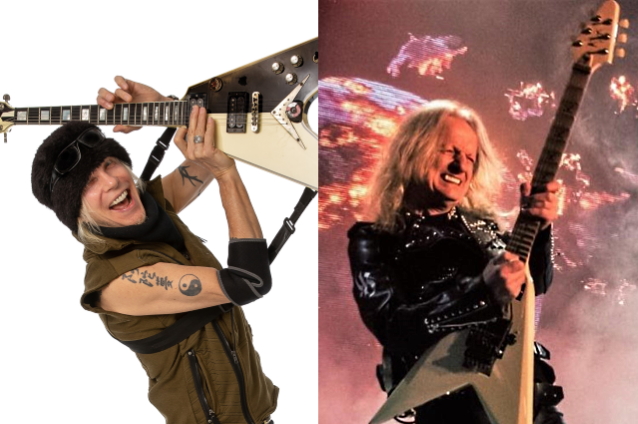 In a brand new interview with the "Rock Of Nations With Dave Kinchen & Shane McEachern" classic rock show, legendary German guitarist Michael Schenker was asked about ex-JUDAS PRIEST guitarist K.K. Downing's claim that he "was the first guy to bring the Flying V [guitar] to heavy metal ever." Schenker said (as transcribed by BLABBERMOUTH.NET): "Those people out there, they are so desperate for recognition and for being the first and taking all the bloody credit, like my brother. It is unbelievable. I have no expectation, and because of that people think they can walk all over me and rip me off and take the credit. I heard even METALLICA saying, the guitarists, that they invented the gallop [rhythm]. I had the gallop on [UFO's] 'Rock Bottom' — well before [METALLICA did]. These people are crazy. They are so desperate for fame."

"Then, when I went to the Whisky A Go Go when I had my first American tour, with my girlfriend, when I was 19 years old — somewhere '74 or so, '75 — we saw JUDAS PRIEST at the Whisky A Go Go. When they came onstage, I looked at my girlfriend and she looked at me. He was a double of me — he was an absolute double. He had the curly hair, he had the Flying V, he had my stage outfit as close as you can get it. It was unbelievable. And the fact is everybody knows that he's a fan of Michael Schenker, so why would he lie about this in the first place? That's just crazy."

Asked when the last time was that he talked to Downing, Schenker said: "We played at his venue [KK's Steel Mill in Wolverhampton, England], and in my dressing room there was a gift from K.K. Downing with an envelope with a nice welcome with chocolates and a whole basket full of goodies and stuff like that and with a thanks note, et cetera, et cetera. Obviously, he was very happy that I was playing in his place."

When interviewer Dave Kinchen questioned Schenker if he is "surprised" by the fact that Downing is taking credit for being "the first guy" to bring the Flying V guitar to heavy metal, Michael said: "I'm shocked, to be honest — that people are so desperate that they even lie about that. Even though people can trace their interviews from the past when they have said that they are Michael Schenker fans, et cetera, et cetera. It's unbelievable. But I'll tell you what: I have heard and seen a lot of things. Nothing surprises me anymore."

Schenker previously voiced his belief that Downing copied his look when he spoke to Canada's The Metal Voice in early April. After interviewer Jimmy Kay noted that it's "amazing" how "everybody [was] copying" Schenker's look and his guitar playing, Michael said: "Yeah, at least that was in the '80s. That's what happens. They either copied me or Eddie Van Halen, or they copied each other on the '80s scene, just to be part of a trend."

In recent years, Schenker has repeatedly accused his brother, SCORPIONS guitarist Rudolf Schenker, of "completely distorting" Michael's "personality as an icon by using the Flying V himself. "Sometimes Rudolf would come up to me and proudly report who'd tapped him on the shoulder and said, 'Hey, Michael, how are you doing?' Slash and Joe Perry, for example," Michael told Guitar World in a 2020 interview. "While I wasn't looking, he managed for years to distort the hell out of the image of the Schenker brothers. People don't have a clue anymore who is who. It's incredible how he managed to distort the whole thing. Rudolf made a deal with Gibson for black-and-white guitars. He asked me if I minded if he played a black-and-white Flying V. I asked myself why he wants to be me, but I just said, 'Go ahead.' Then he pushed it so far in trying to make the black-and-white image his. He doesn't know who he is. Then he had the cheek to make a deal with Gibson for a signature Flying V."

Last year, Downing told Sonic Perspectives that he was inspired to play a Flying V guitar at an early age. "It stemmed from when I was a kid," he said. "I saw the Flying V in the shop and I couldn't afford it. And I used to look at it. I was that Oliver Twist type of kid — [I] didn't have the money, but somehow I knew it was the guitar for what I wanted to do. And now, obviously, the Flying V is synonymous with metal and heavy rock. To me, there was never a question."

"Universal", the new studio album from Schenker's MICHAEL SCHENKER GROUP, will be released on May 27 via Atomic Fire Records.