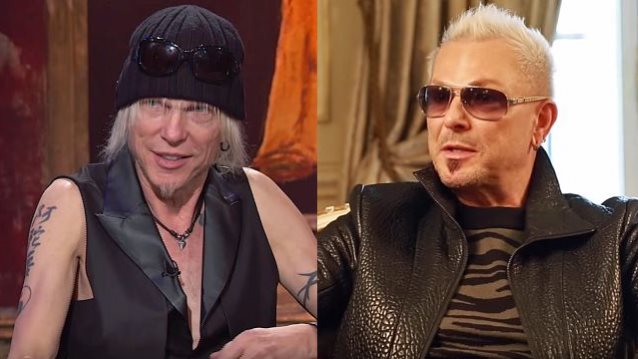 MICHAEL SCHENKER On His Brother RUDOLF: 'He Steals Things' And 'Copies Everybody Else Who Is Successful'

Legendary German guitarist Michael Schenker (SCORPIONS, UFO) has once again slammed his brother Rudolf, saying that the SCORPIONS axeman "steals things" and "copies everybody else who is successful."

Michael Schenker gave a number of interviews in recent months in which he questioned his brother's integrity, going so far as to call Rudolf "a con artist" who "completely adopted [Michael's] image" as his own. He also denounced the SCORPIONS for "distorting" the story of his brief tenure with the band and criticized what he saw as ongoing efforts to minimize the contributions of the group's former drummer Herman Rarebell and ex-bassist Francis Buchholz, as well as SCORPIONS' long-running creative complacency.

In a brand new chat with the "Music Mania" podcast, Michael said (hear audio below): "I was 23 years old when I finished with UFO in America, and I opened the doors for the SCORPIONS, who were already 30 years old when I was 23. So Rudolf can't really quite catch people, newcomers from Russia and China, they cannot put one plus one together together, why [was] the younger one successful before the older one? It doesn't add up. And usually it's the other way around. But it was that way."

He continued: "I taught Rudolf how to play guitar, I taught him how to… He learned from me how to write songs. He wasn't able to write any song. Everything I did with Klaus [Maine, SCORPIONS singer] he copied, and basically copied by my melodies, he copied everything. He wanted to present a fake, to be a Michael Schenker, confuse the people. And Michael Schenker was off the scene anyway; he was enjoying himself, having fun with experimenting with music, being out of the spotlight. So Rudolf had a clear way to do his thing. But I didn't know about it. So, in the meantime, when people were asking me in the last thirty years, 'Oh, what do you think of your brother's success?' I said, 'Yeah, more power to Rudolf. I'm happy for him. As long as Rudolf is happy, I'm happy for him.' One day I heard him coming into the kitchen at my mom's place, and he said, 'This fucking rat race.' So I knew he wasn't quite happy, even though he was successful."

Michael added: "The thing is, he's doing the opposite of what I do: he steals things, and I focus on the art of lead guitar as pure self-expression; it's the exact opposite. Rudolf just looks at the trends and sees what's there and copies everybody else who is successful and does the same thing, and that's all. It must be a very boring life, but I guess he likes it. But then again, if he comes into the room saying, 'Fucking rat race,' maybe he's not that happy."

Despite his criticism of his brother, Michael remains optimistic that Rudolf will see the light in the final decades of his life and will learn that "real happiness" doesn't come from commercial success and material wealth.

"I think he's now with a new family — he has got a new child — and I think what happens is… I can see… As much as I can see my life design in three stages, I can actually see Rudolf's life design," Michael said. "So I'm not bitter about this whole thing. I'm just disappointed that Rudolf had to do it with cheating. He could have established that without cheating. But he has a new family, and I think through the pureness of his child's eyes, he will learn something — he will learn what real happiness is. And I think he needed this kind of fake success, or whatever you wanna call it, but he has definitely experienced success and he knows what it tastes like, and he knows that it is a fucking rat race. So, therefore, he has now an opportunity to… He has long enough [left] to live a life in a completely different way with a new family, and he will be taught, and he will experience and learn that what real happiness is. It's something very different than that what he was chasing all his life, and that what he was chasing so desperately, he even cheated. But I think he will live long enough — equally as long as he has success — to learn all of this, and he will be blessed, and he will have a fulfilled life and he will make a great realization on his last days. And I'm happy for him for that. And I guess that's the way it had to go."

Michael continued: "His life design is just as extreme as mine. But it's just like… The extreme part gives you the extreme insight too. And so everybody has their own custom-made set of circumstances, the journey they go through. I start understanding more and more what my whole point is, and I even understand Rudolf's point. But I'm sure he won't get lost. I think he will turn around and come back to the light, and he will someday realize that, 'Wow! What a journey.'"

Michael Schenker said last year that he was "disappointed" in his 68-year-old brother over the way the SCORPIONS described his time with the band during the writing and recording of the 1979 album "Lovedrive". Michael also claimed that that the SCORPIONS took advantage of him and took credit for his songwriting efforts. It all came to light, Michael said, when he was approached to help with the recent 50th-anniversary SCORPIONS reissues.

Michael told the SiriusXM satellite radio show "Eddie Trunk Live" that he was not interested in reaching out to his older brother to work out their differences. He explained: "My side of the street is clear. I'm just very disappointed. And Rudolf has to figure out what to do with his life. It's on his shoulders. He knows exactly what he did. And so I stay away from him as far as I can, because I don't know what else he's got up his sleeve to justify things. He's a trick master, and he's a wannabe. And that's it. He can do whatever he wants. He can enjoy his life on every level that he wants. But I stay away from him. I'm his younger brother. He's basically bullying me and he's doing with me whatever he wants."