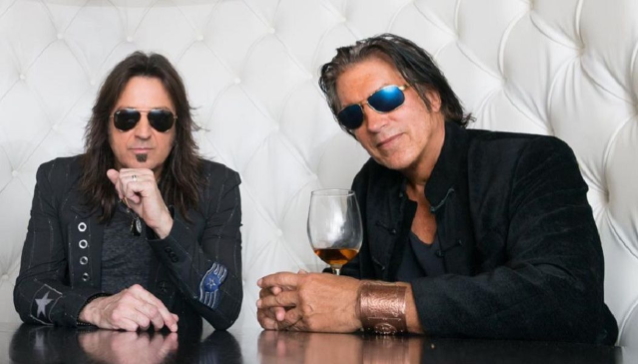 Earlier in the month, Lynch announced that he was ending LYNCH MOB, apparently due to the racial insensitivity of the band name, saying he will no longer record or perform under that moniker.

Asked in a new interview with Anne Erickson of Audio Ink Radio about his SWEET & LYNCH bandmate George's decision to put LYNCH MOB to rest, Michael said (hear audio below): "I heard that too, which is interesting. I'm not sure [about his reasons for doing it]. I haven't talked to George personally about that and if it's based on trying to be politically correct and not offend people. The sad part about that is that's George's name. It's, like, dude, that's your name. You're gonna change your name? It's just so interesting to see.

"Maybe George has other convictions that are causing him to wanna not record under that name, LYNCH MOB," Sweet added. "I kind of get that. The 'MOB' adds a little extra a concern to the name. But, you know, you can't stop using your name… So, if someone has the name White, are they gonna change their name? It's their name. [Laughs]"

Launched earlier this decade, SWEET & LYNCH has yet to play a single live show despite issuing two acclaimed studio albums, 2015's "Only To Rise" and 2017's "Unified", through the Frontiers Music Srl label.

In a 2018 intervie with the "Focus On Metal" podcast, Sweet said that it's likely that there will be no future releases from SWEET & LYNCH.

"I've gotten to the point with SWEET & LYNCH where I'm almost sensing and feeling like maybe it's run its course," he said. "We did two albums. I talked about doing a third and a fourth and a fifth, but there is kind of no point to it if we don't tour. We really should be touring and playing those songs live. It's kind of pointless, after a while, if you're not doing that."

Lynch said in 2018 that the third SWEET & LYNCH would be "a concept record" about Christianity, with George "advocating for one side of the argument" and Michael "advocating for another."