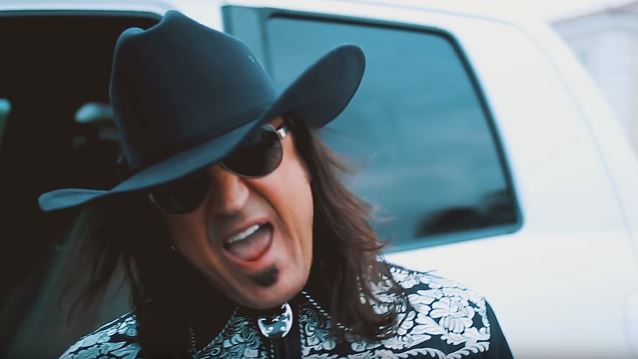 STRYPER frontman Michael Sweet recently took aim at hard rock musicians who have made moves into the country genre in the video for his new solo single, "Radio". The clip finds members of Sweet's solo band — including musicians who have played with WHITESNAKE and Slash — in cowboy hats, dreaming of country gold.

While Sweet doesn't mention anyone by name in the song, artists like Bret Michaels (POISON),Steven Tyler (AEROSMITH) and Aaron Lewis (STAIND) have all tried to become crossover successes by releasing country albums in recent years.

During a new interview with Totally Driven Radio, Sweet commented on the growing number of musicians who have attempted to move from some subgenre of rock music to country. He said (hear audio below): "I think the only time it's a good thing is if it's sincere and real. So, in other words, if there's a guy who's in a rock band, and they're successful, and then he goes country, and you find out he grew up around country music and he knows country and he has written country, and there's some sort of a tie there that makes it real, I think it's great. But sadly, nine times out of ten, that's not the case. It's a money grab. You know, 'Oh, rock's not doing so well now, but country's doing great, so I'm gonna go try to write a country song and cash in on it. I mean, c'mon — let's be real here."

Asked if he thought that rock musicians trying their hands at country could possibly help bring a lot of country fans over to the rock side, Sweet responded: "Well, I think there are already a lot of country fans who are already on the rock side, and I know it for sure there's a lot of hard rock fans that are on the country side. I don't know about you, but everywhere I go here in [my home state of] Massachusetts — I'm talking Massachusetts, okay? — all I hear is country music. And that's great. I love country music. I grew up around it myself. My dad wrote a No. 1 country song in '76, I played on his sessions when I was kid. I love country; I love old-school country music especially. But I would never try to be a country artist — just as I would hope that Blake Shelton would never try to be a metal artist. I mean, that would just be kind of weird, wouldn't it? Or is it just me? So why isn't it as weird when you see rock guys throwing on cowboy hats and cowboy boots and all of a sudden they're country. [It's] kind of odd to me. But, you know, sometimes it works, like Darius [Rucker of] HOOTIE & THE BLOWFISH, he's got a very successful country career, and he's great, man; he sounds great. I mean, HOOTIE & THE BLOWFISH, to me, bordered on country at times anyway. But bands like AEROSMITH… I don't know, man. It's a little harder pill for me to swallow. Bret Michaels [of POISON], a little harder pill for me to swallow. I don't know, man."

He continued: "It's really none of my business, and I'm sure a lot of people, when they read this or hear this interview, are gonna be, like, 'Dude, it's none of your business.' True, it's not, but we all have opinions, and I wrote a song about it, so that's why I'm giving you mine."

According to Sweet, the fact that so many of these crossover attempts have been commercial failures goes to underscore the fact that music fans gravitate to music that is authentic.

"When you're doing music and you're writing a song and recording it, it's gotta be real, it's gotta come from the heart," he said. "Otherwise everybody listening or watching is gonna know it. Fans are not stupid; they're very smart. And this is the reason why when a lot of these artists do try to do it, and they expect the album to do well and it doesn't, that proves my point, 'cause fans aren't gonna buy it unless it's real."

"Radio" is taken from Sweet's seventh solo album, "One Sided War", which was released on August 26 via Rat Pak Records.