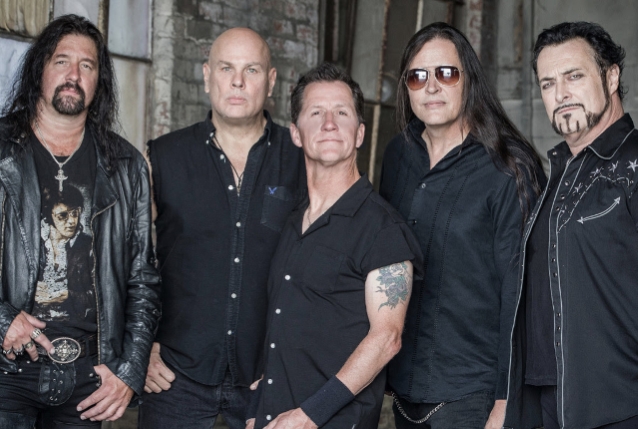 Chris Akin of "The Classic Metal Show" recently conducted an interview with vocalist Mike Howe of West Coast metal veterans METAL CHURCH about the band's new studio album, "Damned If You Do". You can listen to the entire chat below. A few excerpts follow (transcribed by BLABBERMOUTH.NET).

On rejoining METAL CHURCH in 2016:

Mike: "I have to say I was overwhelmed with the response of the fans, and that was the marquee of my coming back for me — reconnecting with old fans and new fans, and just getting out there on the road and being able to do what we love to do and still be able to it. And one of my favorite parts of being on the road, besides playing our music onstage, is, after the show, getting to go out and meet and greet with the fans and sign autographs and take selfies and give hugs and do all that beautiful human connection. So that was something that was really special to me."

On whether he feels like he's in the same business as he was during his original stint with METAL CHURCH in the late '80s and early '90s:

Mike: "No. It's completely different from many aspects, but from where my head is at is number one. Secondary, [it's different] from what it was in good ways and bad ways; the music business still has its pluses and minuses in different shapes and sizes. Having control of our creative side of our band and what we do musically and presenting our band is very important. And Rat Pak Records allows us to do that, so that was a very important part. But it's also a struggle to sell enough records to keep the engine rolling, so that's a challenge of today — the record sales comparatively to the past."

On whether there's enough money to be made to continue recording studio albums:

Mike: "Thanks to Rat Pak Records, who I mentioned earlier, recording the album and putting it out is something that we can do and recoup our expenses. Now, whether we make any money off of doing that is another story. So I can say that, because of Rat Pak, we can go in, and because of Kurdt's [Vanderhoof, guitar] setup — he has his own studio and we do it all ourselves — that allows us to be able to write and record and do that side of our art. But it is very difficult, and I'm sure it's a challenge for all bands. The other challenge is getting out on the road and trying to make money on the road and going everywhere you can with the business budgetizing — [taking] the whole show on the road. So it's definitely a balance between trying to do that and keep a home life. And that's what our biggest challenge is nowadays."

On whether his return has reenergized METAL CHURCH:

Mike: "I feel it very much so. And this second record with me returning was… We went through the same process we always do in the writing, Kurdt and I, but I think just the delivery… We have a new drummer in Stet Howland, and he played his ass off. We are very grateful for him to come in and replace another amazing drummer in Jeff Plate. But whatever happened on that record, everyone seemed to just jell and just put their best foot forward and really express their instrument in a way that is indicative to METAL CHURCH's style, I think. Whatever magic happened, we don't like to question that, because that's art, right? And I think it's a beautiful thing. And also, I think Kurdt Vanderhoof and his mixing of this record — [he] learned some things from the last one and really put his amazing technical effort forward and made a sonically powerful record with vocals upfront and guitars just slamming. I really love the mix of this new album. So I think that does a lot, also."

On his lyrical approach on "Damned If You Do":

Mike: "We like to keep it a little bit nebulous and vague so that people can take their own interpretations of the meaning of the songs. Basically, we went about it the same way we always do. We don't overthink it. In the melody-writing stage, I'll be just screaming out lyrics that come out of my head, and if ideas come out, we go, 'That's cool,' and we use that. We're not really deeply planning anything; it's all spontaneous. So, I think that's important to me and METAL CHURCH, I think, as a whole — it's an aggressive music that lets people get out their frustrations in life. It's rock and roll, basically, in a heavier style. And you can take the message you want from that and apply it to your own life to release a little bit of that frustration. And I think that helps, psychologically, for everyone involved."

On METAL CHURCH remaining consistent in their delivery:

On whether his return has re-established METAL CHURCH's identity:

Mike: "All I know is that it's come back to the Mike Howe era of writing, because Kurdt definitely takes into consideration [the fact that] my voice is gonna be on the songs, so he can write songs more in the vein of how we wrote together back when we started. So it's different. Because [former METAL CHURCH vocalist] Ronny [Munroe] and I and [late METAL CHURCH singer] David Wayne have different styles of singing — completely different styles of singing heavy metal. Their style was the screaming, screeching, terrifying, loud screams, which is an awesome heavy metal style, and people loved that. But that is not my voice. So I'm the opposite — I'm more of a growling yeller; controlled yelling is the way I put it, operatic singing. So, for me, when I came into the band, it was an easy transition for me. It made it easier, I believe, because I wasn't trying to be David Wayne and sound like David Wayne. So, that helped me get recognized as a different singer for METAL CHURCH and [made it] a different era for METAL CHURCH. And maybe — I don't know; I'm just saying this — maybe Ronny's voice is a little more similar to David's that it was a little bit tougher for him. And I feel for him in that way."

"Damned If You Do", METAL CHURCH's 12th studio album, will be released on December 7 via Rat Pak Records. The effort will also be available in Europe via Nuclear Blast and Japan via King Records. The latest release is the follow-up to 2016's "XI", which saw the return of Howe. 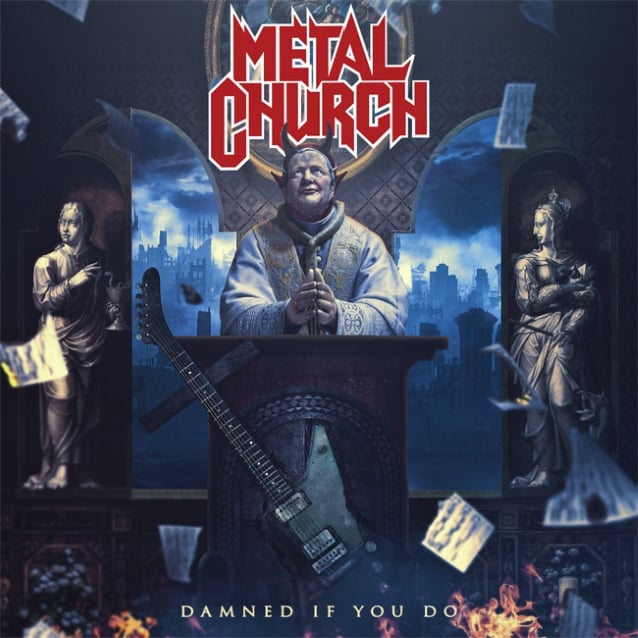 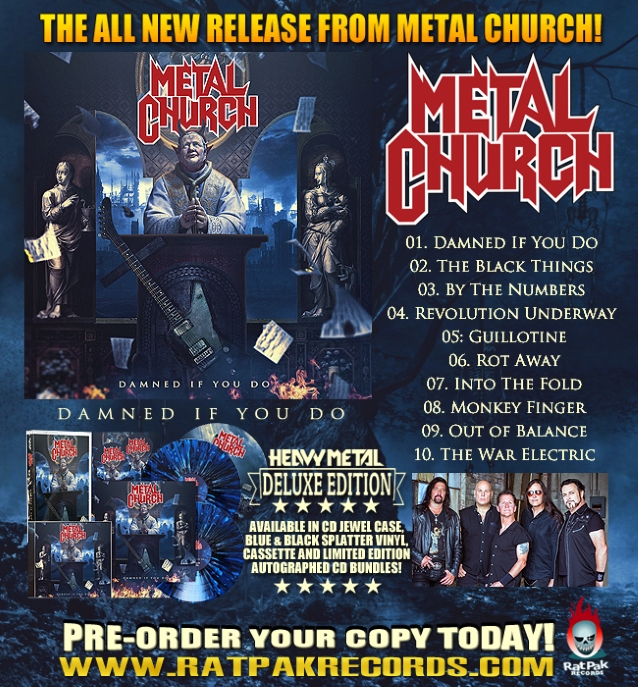