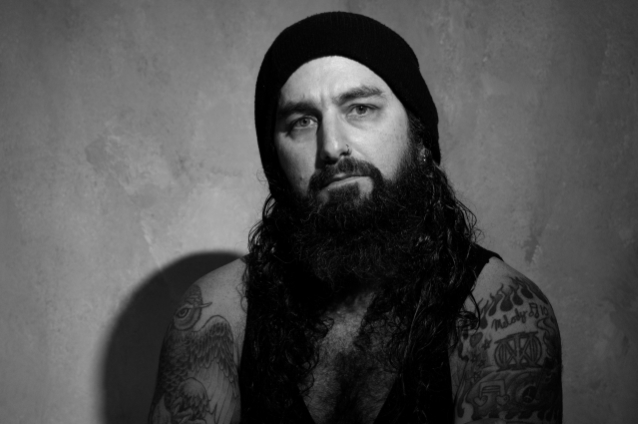 Drummer Mike Portnoy (SONS OF APOLLO, THE WINERY DOGS, METAL ALLEGIANCE) recently spoke with Josh Rundquist of That Drummer Guy. The full conversation can be streamed below. A few excerpts follow (as transcribed by BLABBERMOUTH.NET).

Mike: "After we had so much fun making the first album, we knew a second album would be inevitable. I think myself, Alex Skolnick, David Ellefson and Mark Menghi, we felt we tapped into something. The first album was more like an experiment, because we didn't know how it was going to go, but we also had all these guests. There had to have been 15, 20 other people on the album. We knew this time around, we wanted to streamline it a little bit and kind of focus on the core four. The four of us did all the writing together, and we wanted to streamline the guests — mainly leave it to singers, to give it more of a band feel. The first time around was like more of an experiment; this time around, it really felt like a concise unit between the four of us."

On the album's guest vocalists:

Mike: "In terms of singers, it was nice to get some new blood on this album. People like Mark Osegueda [DEATH ANGEL] and Troy Sanders [MASTODON], they've been in the family now for years, and even the first time around, some of the singers were a little bit obvious, like Randy Blythe [LAMB OF GOD], Phil Anselmo [PANTERA, DOWN] and Chuck Billy [TESTAMENT]. Those were all guys that it made so much sense to be part of the first one, but this time around, we wanted to branch out a bit more, and we got some guys like Johan [Hegg] from AMON AMARTH and Trevor [Strnad] from [THE] BLACK DAHLIA [MURDER] or Floor Jansen from NIGHTWISH. Some of these were suggestions that I wouldn't have even normally thought of, but once they were suggested and we checked them out, it added a whole new kind of element of diversity to the songs... Rather than doing the obvious move, we got to experiment with some different things this time around."

On his own performance on the album:

Mike: "I'm basically just showing my metal side. I've always brought a metal touch to everything I do, whether it be classic rock or prog or whatever. I've always brought that metal element and that mentality, when needed, but with METAL ALLEGIANCE, I get to unleash it and just let it go full-throttle from start to finish on the entire album. To me, it's an exciting outlet that I don't normally have with my other bands... For me, it's the ultimate metal outlet. I've always had all these different projects and different bands, and they were always kind of rooted in prog or, in the case of [THE] WINERY DOGS, more hard rock and traditional rock, classic rock, but I never had a true metal outlet until METAL ALLEGIANCE. To me, it's so exciting because it's a who's-who of literally everybody in the metal world. You have members from ANTHRAX, SLAYER, MEGADETH, TESTAMENT, LAMB OF GOD, PANTERA, MASTODON, EXODUS, OVERKILL... the list goes on and on and on. For me, I love it. Whenever there's an opportunity to play a show with METAL ALLEGIANCE, I don't even think twice about it — I put it on my calendar, and I make sure I'm there. For me, it's a dream outlet."

On the future of SONS OF APOLLO:

Mike: "We're just focusing on the upcoming dates, but we've talked about it. We're hoping to get into the studio early next year. We'll see if the schedules align and everything works out, but that's the plan. I know Derek [Sherinian] and Bumblefoot have been compiling riffs and ideas and putting them in folders, and when the time comes to collaborate, we'll get in the studio and start looking at everything and jamming on everything and bringing it to life. Hopefully that will happen early next year, as we have penciled in at the moment."

On the new NEAL MORSE BAND album that he recently finished recording:

Mike: "Our last album, 'The Similitude Of A Dream', was really special for us. It was one of my favorite albums of my career, actually. To get back in the studio and work on the follow-up to that, the next album coming off the heels of that, it's quite a tall order for us. We spent a lot of time working on it. Normally, when Neal and I get together for an album, we usually can get the writing and arranging and drum tracking done within 10 days [to] two weeks. This time around, we actually spent almost up to a year shaping and writing and arranging this next record, so we spent more time on this album than any album we've ever done in the past. I think it's going to be worth the wait, because what we have is really special and really a worthy follow-up to what we did with 'Similitude'. I look forward to that, and we're shooting for that to be out around January or so, and the tour would start right afterwards. It was really important that we follow up 'Similitude' with something that would be just as epic. It's taken a little time to get there, but it's really special."

On the status of the next FLYING COLORS album:

Mike: "We're going to resume work on that in December. That will be Neal and myself's twentieth studio album together. It's something we started working on about a year and a half ago and we just never got back to work on because the schedules hadn't aligned, but we've all penciled in December to get together, finish the writing for album number three and begin the recording process. Hopefully we can have that out later 2019, fingers crossed."