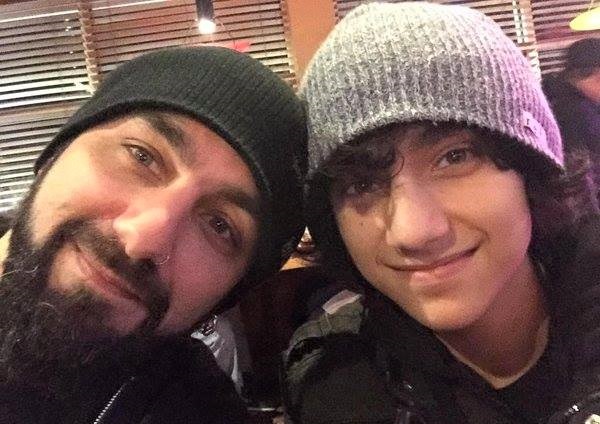 MIKE PORTNOY On His Son MAX: 'He's Got Technical Abilities That Are Beyond What I Could Do'

Drummers Mike Portnoy (SONS OF APOLLO, ex-DREAM THEATER) and his son Max Portnoy (NEXT TO NONE, TALLAH) were recently interviewed by Rockhok. The full conversation can be seen below. A few excerpts follow (as transcribed by BLABBERMOUTH.NET):

On how Mike feels to watch his son follow in his progressive metal footsteps:

Mike: "It's amazing. Some of the proudest things of my life have been things that he's done, not things that I've done, like he won 'Best New Drummer' in Rhythm magazine in 2015. To me, that was, like, bigger and better than any award I've ever won. Seeing him open for me through the years with different bands — they've opened for [THE] WINERY DOGS and ADRENALINE MOB and METAL ALLEGIANCE, so every time, it's such a feeling of pride. And he keeps getting better and better and better, and [NEXT TO NONE] keeps growing and developing and progressing. I think the DREAM THEATER fans can appreciate a lot of the elements. A lot of their elements are also very heavy, very new and modern. It reminds me back in DREAM THEATER, like, if we were touring with MEGADETH, I'd write a setlist that was really heavy. If we were touring with YES, I'd write a setlist that's really prog, and they're kind of the same — they could put together a prog setlist of long, long, epic songs, or they could put together a setlist of all the LAMB OF GOD, SLIPKNOT-style stuff. I love that diversity about them."

On whether Max feels he'll surpass his father's ability:

Max: "I don't know. I just keep playing. I just want to keep improving and doing different stuff. What I did on this new album was stuff I didn't do on the first album, I couldn't do. Even for the next album, there's stuff I have in mind that I want to practice and be able to do for the next album that I can't do currently. I'm always trying to improve and try new things."

Mike: "Obviously, I'm more experienced and developed, but he's got technical abilities that are beyond what I could do. A lot of the blast beats and the super, super fast double-bass stuff, I can't do that. I'm 50 years old now; I have limitations. He's 18, and he's growing up in a different age. The bar for drummers and musicians keeps rising and rising and rising, and he's part of this new crop of drumming technical abilities that are beyond what I could do. It's amazing. His performance on [NEXT TO NONE's latest album] 'Phases', if you listen to the drum parts, they're very, very creative. They're very busy — he's an incredibly busy drummer; he's 18, of course. I was like that when I was that age as well. But [he's] very creative. That's the thing that I love about his drumming on this latest album. You listen to the drum parts and they're very musical, very interesting and very creative."

On what skills Max hopes to inherit from his father:

Mike: "It's experience. I've done thousands and thousands of shows for decades now, and that comes with age, I think. [He'll] get there."

On the inevitable comparisons between the two:

Mike: "There's pros and cons to that, obviously. His name is going to get his foot in the door and get people's attention to listen, but I can imagine it's probably annoying for them and for Max, but hopefully with time, they'll be able to stand on their own. I think musically, they already do, but that's inevitable — that's one of the things that's inevitably going to come when you're the son of somebody that's known. I think he's handling it pretty well."

On whether Max reminds Mike of himself:

Mike: "He's a little quieter and shier than I am. I was always very extroverted and loud. But he's definitely as animated as me on stage, and he's got that youthful energy that I don't have anymore. [Laughs] He's an amazing performer, and I love watching him play. Not only is he a great player, but he's a great performer, and to me, that's an important aspect of a drummer. But everything about him reminds — he's totally Mini-Me. He just needs the blue beard, but that will come in a couple of years."

On why NEXT TO NONE, whose debut album Mike produced, decided to produce "Phases" themselves:

Max: "For us, we really knew how we wanted the album to turn out, and we just figured it would be best to stick to just the four of us when producing this one. We felt like if we got someone else, they could have changed it, because it kind of goes from, like... Some songs are kind of straightforward — I shouldn't say straightforward, but they're just, like, real metal songs, and then some of the songs are just super-prog songs. We felt like someone else could have changed that and gotten rid of one of the two, where we wanted to be able to do both. Even though those songs still have elements from both sides, it was something we wanted to do and keep true to it. If it was just the four of us, we could definitely get that idea across. It was definitely best for us to just stick to the four of us. I'm not saying my dad would have changed it; I'm just saying if we got a producer, we had ideas and visions that we wanted to stick to."

Mike: "I get it. I totally get it. If [DREAM THEATER] could have self-produced 'Images And Words', we would have, but we didn't have that kind of leverage. I think when I produced their first album, I wasn't shaping the songs; I was just kind of showing them how you make an album, and the studio experience, and how to divide your time and be productive, [and to] show them the way around the studio and overdubbing. That was my role with the first album. With the second album, they already knew how to do that. They know what they want; they don't need a producer. When you're making this kind of music, you don't need a producer. If you're making pop albums or trying to write hit singles, then yeah, but if you're writing 20-minute prog epics, as long as you know how to make it sound good and you have a good mixer, that's all you need."

Last year, the Portnoys toured Europe together when NEXT TO NONE opened for SHATTERED FORTRESS, Mike's live project in which he performed DREAM THEATER's "12-Step Suite" and other material from his two-plus decades with the legendary progressive metal group.