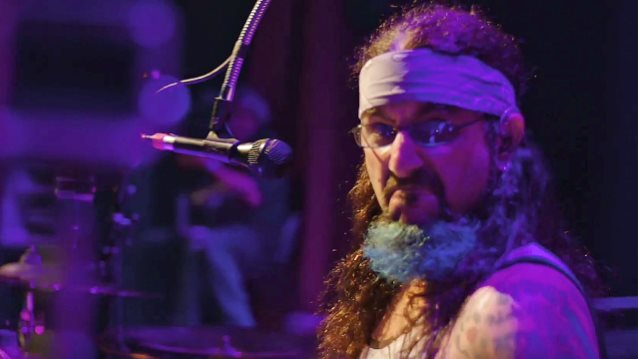 MIKE PORTNOY: 'Out Of The Eighty-Seven Bands I've Been In, I've Only Ever Left Two'

Mike Portnoy has defended himself against criticism that he is involved with too many bands, explaining that he is simply someone "who loves music" and wants to "play with different people."

Since leaving DREAM THEATER in 2010, the drummer has been involved with a slew of projects, either as a hired gun or a collaborating musician. These groups — which include AVENGED SEVENFOLD, THE WINERY DOGS, ADRENALINE MOB, METAL ALLEGIANCE and TWISTED SISTER — are notably different from each other and from the music Portnoy earned his stripes playing.

During an appearance on the "Trunk Nation" radio show earlier this week, Portnoy addressed the complaints from some fans that he launches new bands too frequently and doesn't spend enough time focusing on each project.

"I still feel blowback from it," Portnoy said. "Even with [this week's] announcement; we announced the new band SONS OF APOLLO. I've been up reading the comments online, and I'm still seeing constant posts, like, 'Oh my God! How many bands is Portnoy gonna be in? Oh my God! Is this the eighty-seventh band?' Blah blah blah. So it's still a topic that people like to harass me about. But the fact of the matter is I can handle it. I'm just a workaholic and I'm very strategic in how I coordinate and work my schedule and make sure everything fits and everything works. And people get the misconception, thinking, oh, I start a band, then I quit, then I start a band and then I quit."

He continued: "Out of the eighty-seven bands I've been in, I've only ever left two. One was DREAM THEATER after twenty-five years, and one was ADRENALINE MOB, just because that was at a point where I couldn't juggle everything. But other than that, everything I'm a part of I stick with and develop and work with. And if I can juggle all these bands and make it work, then why the fuck not?"

Asked if it's really true that he has been in eighty-seven bands so far, Portnoy laughed and responded: "I use that number jokingly, but I think there is an actual number, and I think it's about twenty-seven or twenty-eight at this point."

Mike went on to reiterate the fact that his busy schedule has never prevented him from dedicating the right amount of time to each project, despite some people's perception to the contrary.

"Since [I left] DREAM THEATER, I've done so many things and so many different bands," he said. "Literally, it feels like there's another one that gets added to the list every year, not to mention helping bands out, like TWISTED SISTER or AVENGED SEVENFOLD. So, yeah, the list keeps getting longer and longer and longer. But the fact of the matter is if you're somebody who loves music, like I do or Dave Grohl does, or Mike Patton does, you wanna do different things, you wanna play with different people. If you're an actor doing films, you don't wanna play the same role the rest of your life. You wanna work with different directors and other actors and other screenwriters and try different roles in different genres. So, to me, it's no different as a musician."