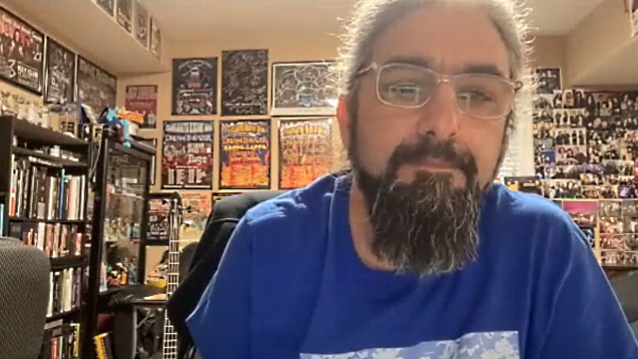 MIKE PORTNOY Says He Is 'The Worst' When It Comes To His Exercise Regimen On The Road: 'I'm So Out Of Shape'

During an appearance on the latest episode of Dean Delray's "Let There Be Talk" podcast, former DREAM THEATER and current THE WINERY DOGS drummer Mike Portnoy spoke about how he gets in shape for his live performances and what his exercise regimen is while on the road. He said (as transcribed by BLABBERMOUTH.NET): "I'm the worst, man. I'm so out of shape. I could play a three-hour show, no problem, 'cause it's just muscle memory for me. Those are the muscles that I've been using for 45 years or whatever. So I could play a three-hour show, no problem, but if I had to frickin' jog down the block, I would die. I can't do it. … My body is starting to feel it at this age. My back is always hurting.

"What do I do? I don't know," he continued. "I try to take care of myself the best I can, but it's hard on the road when you travel as much as I do.

Asked by Delray if he gets into yoga or stretching before live performances, Portnoy said: "I'm so bad, dude. I can't even touch my toes. … To be honest, I had issues… When I was in my 30s, I was having bad tendonitis in my elbow, so I had to start wearing a brace on stage when I was trying to recover from that. And at that point I started going for massages regularly — you know, legit massages. A real masseuse would come to the gigs each day and I would have to get a massage before going on stage each day. And that helped me a lot, actually. Getting massaged regularly and maybe going to the chiropractor as much as I can as well. That helps."

THE WINERY DOGS will release their third album, "III", on February 3 via the band's Three Dog Music label (via Burnside Distribution/The Orchard). Following in the footsteps of their first two albums, "III" was once again produced by THE WINERY DOGS and mixed by longtime band associate Jay Ruston.

"III" is the follow-up to the band's critically acclaimed and Billboard-charting album "Hot Streak", which was released October 2, 2015 on Loud & Proud Records via RED (a division of Sony Music Entertainment).

THE WINERY DOGS is hitting the worldwide concert trail starting February 15 in Greensburg, Pennsylvania at the Palace Theatre for their "202III World Tour". Ticket and VIP package info can be found on the band's official web site.