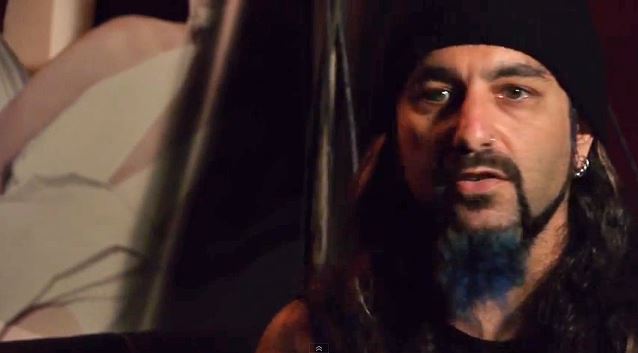 MIKE PORTNOY Slams U.K. Hospital For 'Not Seeing' Him

**UPDATE #2: March 8**: Mike Portnoy has posted the following message in response to the controversy that was generated by original comments about the Whittington Hospital: "Thanks to all of the kind understanding people that sent well wishes & positive vibes my way yesterday…it was one of the worst days of my life...sadly, still not feeling much better today, but the show must go on! And to the rest of you: 'I don't have time to hate people who hate me because I'm too busy loving people who love me.'"

**UPDATE #1: March 8**: Mike Portnoy's wife, Marlene, has defended her husband against accusations that he expected preferential treatment at a hospital in London, England prior to THE NEAL MORSE BAND's March 7 performance in the city. Writing in the comments section below Mike's original post (see below),she said: "Some of you people are just so HORRIBLE! He didn't ask for special treatment because he is famous. His concern was the FANS that paid good money to see a concert that was about to get canceled! He had already spent most of the day just trying to get seen by a doctor, was looked at by the paramedics who told him to go to the hospital and on the way the ambulance actually ran out of gas — YES, RAN OUT OF GAS — leaving him stranded and having to try to get transportation to the hospital, only to sit and wait for an endless amount of time, missing the meet-and-greet, that, again, fans paid a lots of money for! So when he asked if anyone even a nurse could just look at him for 2 minutes or just prescribe him an antibiotic because there was a venue full of people that were waiting for a concert, and you all call him a crybaby, or accuse him of expecting special treatment.

"What is wrong with you people? How can you be so horrible and so mean?

"All he told me all day is how upset he was for the fans and how unfair it was for them to be stuck waiting. He was told he had to wait several more hours before anyone could look at him.

"Does this hospital only have one doctor?

"The concert would have been cancelled and at that point there is no possible way to call in a replacement so he left played a show with 102[-degree] fever to not let down the fans, spent a day of hell just trying to be seen by a doctor or anyone that could help him, while being in another country where he isn't even from and this is your response!!!!

"WHAT IS WRONG WITH ALL OF YOU? You are just horrible, disgusting people who love to twist the truth so you can say mean and nasty thing about other people! This is a disgrace."

She added in a separate post: "He didn't say anything mean or nasty about any one person, he didn't attach anyone's character or name call. He just made a statement. He didn't ask anyone to stop caring for other people that were sick. He just was asking for help after a long day and being sick. He was taking meds and nothing was helping. He was left stranded by an ambulance that ran out of gas.

"I'm sorry, but that service stinks!

"Maybe the person at triage was nasty.

"I've been to the emergency room here in the USA and have not always been met by these wonderful people you are all claiming to be. There were times they were super nice and times they were nasty. Well, successful musicians are people too, and they feel pain and they get sick just like anyone else.

"I have no idea what is wrong with him. If someone would have taken a minute to check, maybe we would know.

"The way it works here when you get to the emergency room they take you and do a quick check to see what the problem is and how serious and then you wait to be seen or they take you in right away.

"Sorry, but the hospital had bad service. Hey, it happens. Not every hospital is great and this one, well, it wasn't so good, and he is allowed to say it just like you would if you received bad service."

She added: "Mike didn't ask nor did he want doctors to stop helping people in need so they could help him. That is just something all these people assumed and decided to create. He was just trying to get help. He had been trying to see a doctor or nurse practitioner ALL DAY!!!!! Not for 5 minutes, for hours and hours and hours, he didn't just burst into the hospital and demand everyone stop what they are doing and help him. All these people made up that story. IT NEVER HAPPENED!!!!

"Do you have any idea the type of insurance plan I need to get my husband health care coverage in other countries!!! We pay a fortune as he travels all over the entire world. He doesn't work for a big company that pays for part of his coverage. We pay for it for ourselves and then pay deductibles and such. Free treatment, give me a break!!!"

Marlene continued: "You all just assume the worst and and want to bash him. He did wait for HOURS!!!!! And finally left. He was told by the paramedics that they would bring him to the hospital. Oh, but wait, THEY RAN OUT OF GAS ON THE WAY THERE! What kind of ambulance doesn't check their gas gauge what type of treatment is that!!! And then they don't get someone to get him. They were like OH SORRY find a ride,

"I want to know how many of you people would be angry with the hospital or the nurses or paramedics or anyone associated with the hospital had you been in the exact situation. I'd bet my life if you had the same day long horrible experience Mike had trying to see a doctor you'd all be bithching way worse then him. Mind you all while being extremely sick! You all have such big mouths I'm SURE you be screaming from the roof tops!!"

Former DREAM THEATER drummer Mike Portnoy, who is currently touring Europe with THE NEAL MORSE BAND, has slammed the staff at the Whittington Hospital in London, England for allegedly refusing to see him quickly enough so that he could make it in time to the Islington Assembly Hall, where the group is scheduled to perform tonight.

In a post on his Facebook page, Portnoy wrote: "A very special NO THANKS to the staff at the Whittington Hospital for NOT seeing me regardless of telling them that there is an audience waiting for our show to begin... I finally left withOUT seeing a doctor in order to make tonight's show... I have no idea how the hell I'm going to make it through this show...I can't even stand up or lift my arms... : ("

After one person responded to Portnoy's Facebook post by saying, "Not to be rude, but if someone was dying, I'd hope they didn't move you to the front of the line just to get you to a show. Very narcissistic thinking here," Portnoy replied: "Keep 'em coming! Can't wait for everyone to see what an idiot you are before I ban you."

"As much as I'd jump at the opportunity to help you if I actually was on call tonight, please try to understand. Us healthcare professionals don't want anyone to wait or suffer at all. However, we encounter life-threatening conditions every hour, sometimes every minute, that stop us from seeing others that may be slightly less unwell, as quickly as we'd like.

"The NHS is under-financed, understaffed, overworked. We do have to economise our resources.

"With all the respect I have for you, it hurts when one of my idols insults an organisation I work very hard for.

"Waiting sucks, I know, but dying patients suck even more.

"I sincerely hope you feel better and that the show goes well tonight. Gutted to be missing out due to a prior engagement. Rock on, though. [I] love the new Neal Morse album."

Portnoy apologized to fans earlier in the day for missing this evening's VIP meet-and-greet. He explained: "I'm extremely sick and on my way to the hospital right now... Hopefully we can still pull off tonight's show without a hitch."

According to the National Health Service (NHS) web site, the Whittington Hospital is part of Whittington Health, which provides general hospital and community services to 500,000 people living in Islington and Haringey as well as other London boroughs, including Barnet, Enfield and Camden.

The Business Insider reported in January 2015 that "NHS just released its most recent stats on accident and emergency room waiting times. The headline number is that 84% of patients are seen within four hours. In the UK, this is regarded as a huge failure — the standard the NHS is supposed to meet is 95% of patients in four hours." 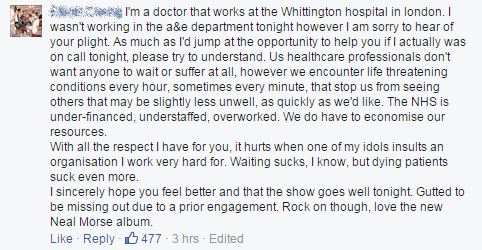 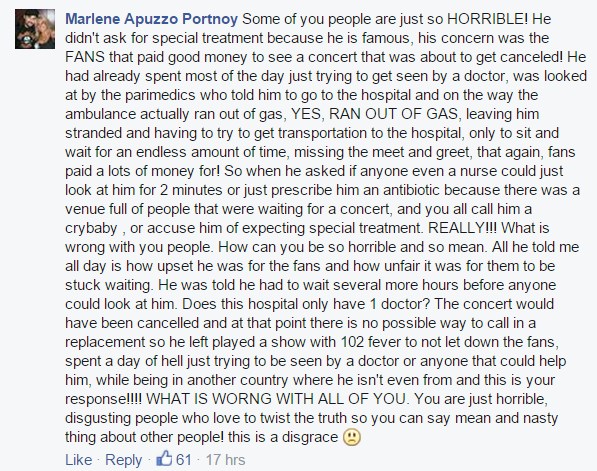 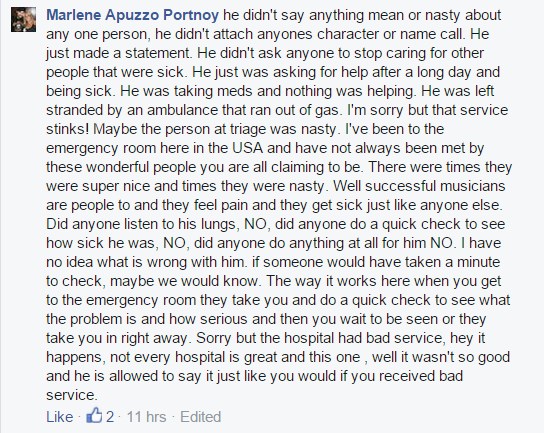 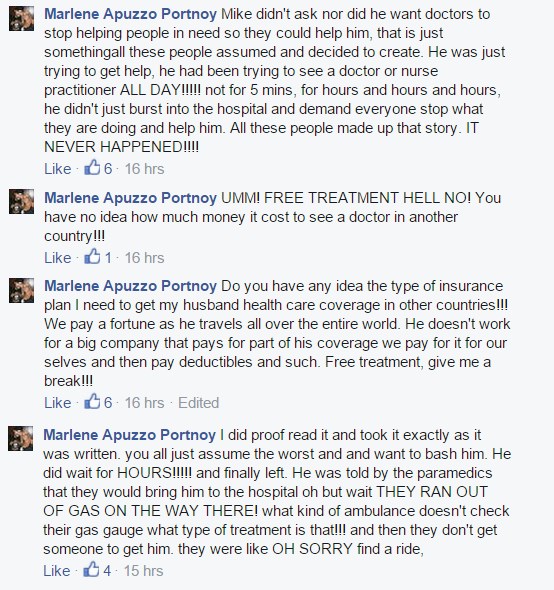 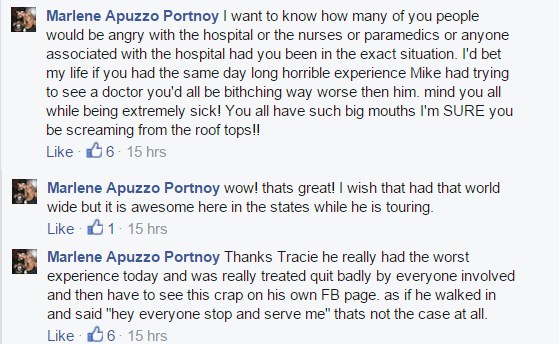