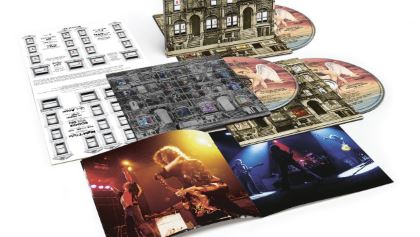 LED ZEPPELIN's 1975 abum "Physical Graffiti", which just was reissued in expanded form, sold around 40,248 copies in its first week of re-release to land at position No. 11 on The Billboard 200 chart. This marks a 6,875 percent increase in sales compared to the previous week's total of 577.

According to The Pulse Of Radio, Jimmy Page credits the outtakes featured on "Physical Graffiti" for helping define the band's beloved double album set. Just under half of the set was culled from the band's three previous albums — but none were discarded at the time due to their quality, but rather for not fitting the vibe of their parent album. Page told The Pulse Of Radio that with the extra room available on "Physical Graffiti", there finally was room for these orphan tracks to find a place.

The Pulse Of Radio asked Page if he knew going in that "Physical Graffiti" was going to be a double album — and whether half the set would be comprised of outtakes from the band's previous albums. "I thought about it, but it was as good as the material that we came up with," he said. "I knew it was going to be fun to revisit this stuff and sort of even go retro on ourselves. There's not many… Nobody had done that, really. Not that I know of. And I just thought that it would be really good to add even more colors to the pallet. Because there was such variety across the other albums, and just to make something that was such a statement, that 'this is what we do, and how we do it, and nobody is anywhere near it.'"