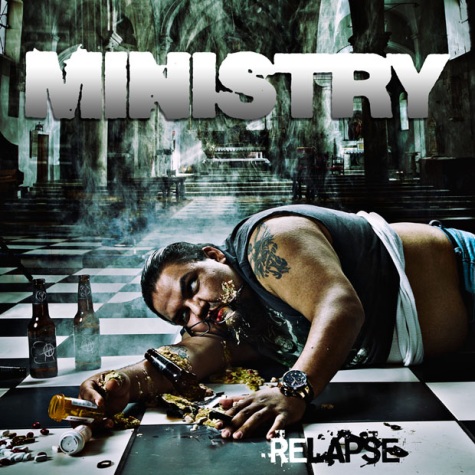 Thirty years and 12 albums later, as well as a near-death experience in 2010, Jourgensen rises as a phoenix from the ashes with "Relapse" — still angry, still political and very very pissed off. Relapsing back into the music industry after a four-year hiatus, Jourgensen launches his audio assault with "Ghouldiggers", a no-holds-barred metal bullet aimed directly at the pitfalls of the industry he has survived. Everything Jourgensen predicted on "Houses Of The Molé", "Rio Grande Blood" and "The Last Sucker" has transpired and as we approach the Mayan calendar of the End of Days in 2012, Jourgensen, re-invigorated by the global 99 Percenters and Occupy Wall Street movement, navigates through "Relapse" once again as a reluctant prophet accusing, dissecting, cajoling and exhorting greed, corruption and lies.

Reaching back to his punk rock roots, Jourgensen and his MINISTRY pirates cover S.O.D.'s "United Forces" — a track written 20 years ago still relevant today as a call to arms for the unrighteous and to those who feel disenfranchised by the "system" as it stands today.

Cited as the driving force behind a cross-section of metal genres from industrial's NINE INCH NAILS and STATIC-X to nu metal's KORN, LINKIN PARK and LIMP BIZKIT, and receiving six Grammy nominations for "Best Metal Performance", Jourgensen returns with his greatest achievement to date with "Relapse".

"Double Tap" will be released as a maxi-single on February 24.

Jourgensen spoke to U.K.'s Metal Hammer magazine in August about his band's decision to reform for a new album and tour, including an appearance at next year's Wacken Open Air festival in Wacken, Germany.

When asked how the resurrection of MINISTRY came about, Jourgensen said, "While I was working on [the BUCK SATAN record], me and Mike Scaccia from RIGOR MORTIS fucked around to pass the time and we had like, 5,6,7 songs and I didn't really want to do anything with them but Mikey was like, 'Dude, these songs are awesome.' They weren't country, they were more like MINISTRY. So he's coming by in September and Tommy Victor's [PRONG; guitar] coming by in October with Tony Campos [SOULFLY, ex-STATIC-X; bass] and we're gonna finish up another MINISTRY album by Christmas called 'Relapse'."

Regarding the sound of the new MINISTRY material, Al said, "I think this is actually gonna wind up being the fastest and heaviest record I've ever done. Just because we did it as anti-therapy therapy against the country music we would just take days off and thrash faster than I've done in a long time, faster than Mikey's done in a long time. He did a RIGOR MORTIS tour and said it was easy compared to this MINISTRY stuff so it's gonna be brutal and it's gonna freak a lot of people out."