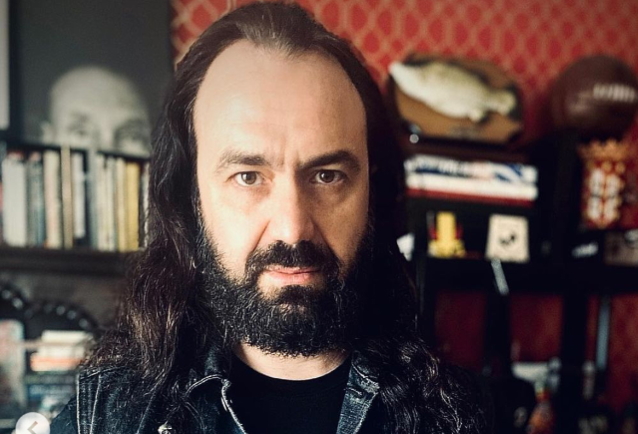 MOONSPELL Singer: 'We All Want Shows To Happen, But We Want To Make Sure That It Happens Safely'

Singer Fernando Ribeiro of Portuguese metallers MOONSPELL has told Consequence Of Sound in a new interview that he is feeling "good" about the prospect of "in person shows" resuming in the not-too-distant future. "Sometimes the discussion is reduced to money," he said. "Obviously, the music industry and the music business and the way MOONSPELL is involved, you take a bit of everything — the author rights, online shopping, the record sales — but sometimes the big chunk of it comes from playing live shows and selling merchandise. But it's not only about the money. It's also about the lifestyle.

"I have been touring since 1995," he continued. "I'm not like this, but I know some people that get really depressed and devoid of any meaning in life when they are not touring or traveling. But here in Portugal, one of the positive outcomes from the pandemic is that the musicians, the industry and the cultural scene that might usually be competitive have all come together. We created this movement, #CultureIsSafe, and last year we played four shows. It's not a lot, but it was very important psychologically. It was also proof for people who work within live shows that they really know how to organize and there were not any COVID cases reported or connected to the shows.

"The last show we did in 2020 was in Porto, the second-largest city in Portugal after Lisbon in an arena that holds 2,000, but we had 700 people which was the limit. You feel hopeful because you really feel the love of the fans, to be distanced, wearing a mask, listening to MOONSPELL. It showed that they just really wanted to be there.

"Live shows are so important not only for the money it generates but for the good energy it brings. To have these shows, you have to organize a community first, and everyone worked together.

"We're all in the same sinking boat, as I say jokingly. And even though the new album is about the hermit age and solitude, it's also about community. I went to this big demonstration and almost all the musicians in Portugal were there in this big arena, and I felt that we had each other's back and right now we're fighting for the survival of our scene. It's a goal for everyone. We all want shows to happen, but we want to make sure that it happens safely."

MOONSPELL released its 13th studio album, "Hermitage", on February 26 via Napalm Records. The disc was recorded, mixed and mastered by Jaime Gomez Arellano (PARADISE LOST, PRIMORDIAL, GHOST, SÓLSTAFIR) at the Orgone Studios in the U.K.