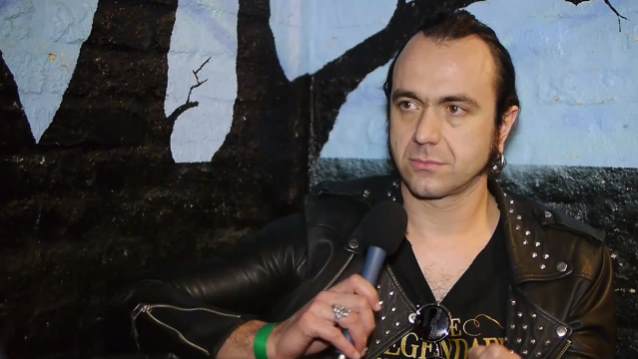 Superskum.com recently conducted an interview with vocalist Fernando Ribeiro of Portuguese metallers MOONSPELL. You can now watch the chat below.

The "photobiography" book celebrating the 20th anniversary of MOONSPELL, titled "XX", was made available last year in both Portugese and English.

In a 2012 interview with Decibel magazine, Ribeiro stated about MOONSPELL's decision to separate the more aggressive/darker songs from the more gothic/rock-oriented songs on "Alpha Noir": "For the challenge, really. We needed, for ourselves mostly, to split MOONSPELL in two and to stop facing the problem we have with being sometimes too all over the place musically.

"We wanted first to take more time, and so we did. Almost four years. We wanted to do a lot of songs. We did. We wanted to head more into something that showed a solid sense of togetherness. Therefore, we set ourselves to do one 'Alpha' album, the arena one, where the tone will be solely electric. Believe it or not, that gave us two essential things for this album: first, freedom to work really hard on a metal basis and not to face the dilemma of the atmospheric B part; the second, it made us hungry for a style like 'Omega White', more melodic, gothic, catchier.

"It's perhaps strange to admit musicians are moody people, but in the end of day I can gold the pill, but it's exactly on our restlessness that our strengths and weaknesses as a band dispute their ground.

"We wanted something fresh, that could please both hungers, we wanted the enthusiasm of 'Memorial', 'Night Eternal', 'Under Satanae', but we craved for Irreligious's gothic rock atmosphere, for the TYPE O [NEGATIVE] and SISTERS OF MERCY in us and we went as far as doing two albums. That's our commitment with ourselves this time, something more personal, which will extend to all the sensibilities that are a part of the process. If two albums are needed to please our hunger, so let it be."