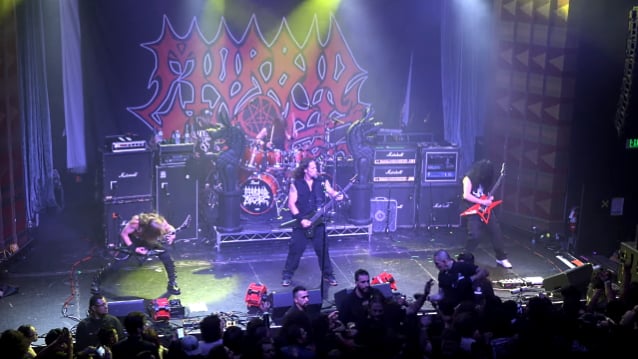 "Kingdoms Disdained" was released in December 2017 via Silver Lining Music in the U.S. and JVC in Japan. The disc, which reunites founding guitarist Trey Azagthoth with bassist/vocalist Steve Tucker, was recorded at Mana Studios in St. Petersburg, Florida and produced by MORBID ANGEL with Erik Rutan (CANNIBAL CORPSE, HATE ETERNAL, SIX FEET UNDER, BELPHEGOR).

MORBID ANGEL in January 2017 announced the addition of Dan Vadim Von (guitarist/frontman of the American death metal band VADIMVON) to the band's lineup on second guitar. He joined the group as the replacement for Norwegian guitarist Destructhor (a.k.a. Thor Anders Myhren),who left the band seven years ago.

Azagthoth made headlines in 2020 after he was arrested on a misdemeanor DUI charge near his home in Florida. Several months later, he pleaded no contest to reckless driving as a reduced charge from DUI. He was also ordered to complete "DUI School", pay a small fine and perform 50 hours of community service.