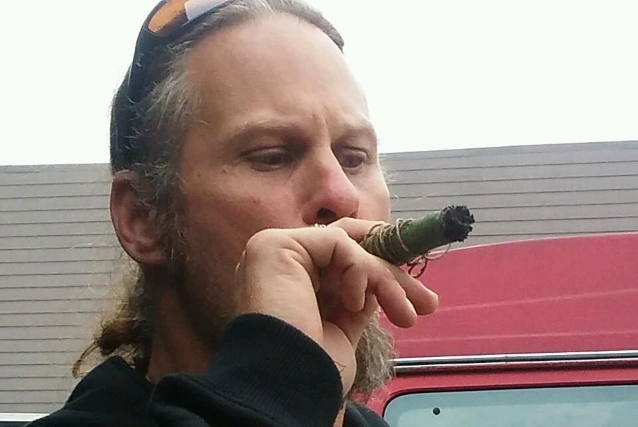 A proponent of ending the federal ban on marijuana, MORBID ANGEL frontman Steve Tucker was asked in a new interview with Heavy Music Headquarters if he thinks the Drug Enforcement Administration will eventually reschedule pot into a lower drug class, opening the way to federal legalization. "Yeah," he replied. "You can step back and look at it from a distance and see what it's all really about. What it's really about is people making money off of it. I think the cry for people to be allowed to do it because 'hey, we can make a shitload of money' will be the reason it's legalized.

"There are commercials and ads on television to buy stocks in marijuana, to do all of these things to get rich through marijuana," he continued. "One of the most natural things in the world is illegal. We're not kids. We are adults. We're fucking adults! There has always been so much proof about what the plant does. It really shows the ignorance and thick-headedness of government as a whole. It's ridiculous that a plant would become a political issue that money is the only thing to bring these people to realize its value. Money shouldn't be what value is all the time.

"That ties in with the other question. It's all about control, and money can, all of a sudden, change control. There is the opioid problem plaguing the whole country. That really shows you what people value. They sold this thing to help people; it's to help people get addicted. People had pain relief long before Oxycodone or Oxycontin. They got along fine and everybody wasn't strung the fuck out. It went from that to heroin. Come on, are you going to tell me those two aren't connected? The pharmaceutical companies are feeding the government. It's all them telling us adults what we can and can't do.

Tucker, who is back for his third spell with MORBID ANGEL, added: "I go places on tour where drugs are legal. You see where it actually takes it off the street. It almost makes it less desirable for some people. It's not cliché. I think people get into drugs because they are doing something they're not supposed to do.

"I think they got it all wrong calling marijuana a 'gateway drug.' The fact is they made it a gateway drug by lying about it. They lied about it, saying, 'If you smoke this, you're going to jump off a bridge or freak out. This makes people rape people.' When they said all of those lies and then when a 13-year-old kid smoked a joint with their friends for the first time, sat and laughed his ass off, he didn't want to harm a fucking fly, he realized, 'This is awesome! Why am I not allowed to do this? I'm not worried about everything in my life for 20 minutes.' That's when you realize the government is lying. Then they start to think, 'Oh, well heroin must not be as bad as they claim.' In my opinion, that makes it a gateway drug."

The current Tucker-fronted lineup of MORBID ANGEL released its latest album, "Kingdoms Disdained", in December 2017 via Silver Lining Music in the U.S. and JVC in Japan.

Later this month, MORBID ANGEL and CANNIBAL CORPSE will join forces for the first time ever in America to co-headline the 2019 Decibel Magazine Tour. Rising Bay Area brutalizers NECROT and space-obsessed Denver death dealers BLOOD INCANTATION round out the bill. New York death metal icons IMMOLATION will join the final week of the tour as main support to MORBID ANGEL, as CANNIBAL CORPSE exits the tour after the New York City date.