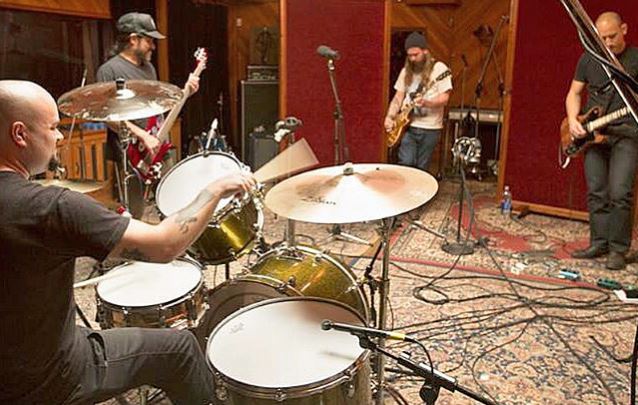 METALLICA bassist Robert Trujillo has joined forces with drummer Rick Smith from underground metal act TORCHE, HARMONIC CROSS members Brent Eyestone and Graham Scala, and Nate Newton from CONVERGE and DOOMRIDERS in a new, yet-to-be-named musical venture. Eyestone told Noisey about the new band: "It's a project through the Tony Hawk Foundation. We're doing this record; it's just going to be a couple of tracks that we're going to put out digitally and on vinyl. All the money that comes in will be donated to the Tony Hawk Foundation."

He continued: "We all like to skate and we believe in that charity; making free skateparks for lower-income areas.

"There's no name and no release date, but once it's done, all proceeds will go to public skateparks.

"We're just rabid musicians who want to make new stuff and not put a cap on what it is. It could be an ambient record, it could be a weird, negative hardcore record, or just a band with people we didn't think we could get."

The music from the new project, which has been described as "on the heavier side of the spectrum," was recorded by Chris Owens, who has worked on albums by PELICAN, HELMS ALEE and THESE ARMS ARE SNAKES, among others.

Trujillo told Rolling Stone in a recent interview that METALLICA is "having a blast" working on songs for its tenth studio album, adding, "We are being productive and having fun." Asked if the new material is in the same vein as 2008's "Death Magnetic" album, Trujillo said: "I can't say that yet. I really can't relate it to any album; I think every METALLICA album is unique in its own way. What we're doing is special and unique in its own way, but still keeping it heavy."

Trujillo continued, "For me as a listener, part of the journey I'm on with METALLICA, there's just a certain edge that needs to be there… I can tell you that what we're doing sounds heavy, but again each album is its own little experience. So we'll just have to wait and see."

METALLICA is one of the headliners of this year's edition of Lollapalooza, along with Paul McCartney. The festival will take place at Grant Park in Chicago, on July 31, August 1 and August 2.