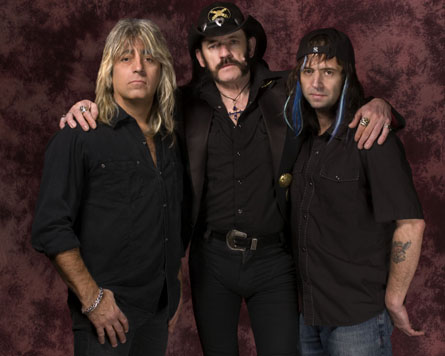 The latest installment of the "Iron City Rocks" podcast (web site) features a brand new interview with MOTÖRHEAD drummer Mikkey Dee. The podcast is now available for streaming using the audio player below.

MOTÖRHEAD's new album, "The Wörld Is Yours", was released in North America on February 8. The CD is a vital, scorching statement of intent from the band as they launch Motörhead Music, their very first record label.

Written and performed by Lemmy Kilmister, Philip Campbell and Mikkey Dee in both Los Angeles, California and Wales, with production once again by Cameron Webb, "The Wörld Is Yours" serves to remind everyone that you should never stop questioning or critiquing a society that would surely chew you up and spit you if given half a chance. And with 10 soul-scorching testaments to the unbridled power this world-famous trio continually maintain, "The Wörld Is Yours" delivers some of the finest, most important Motörmusic yet.

Recorded during the late spring, the album's creation was thrown into turmoil by the poor health and sad eventual passing of Philip Campbell's father; the situation dictated that Philip needed to be home during some of the scheduled recording time, so MOTÖRHEAD hired a studio in Wales where Campbell was able to continue working on ideas and record tracks whilst first Mikkey and Lemmy, and then just Lemmy, laid down the rest of the album in L.A. But being MOTÖRHEAD, nothing fazed them, and with "The Wörld Is Yours" the band have triumphed over adversity to produce an absolute stormer of an album.