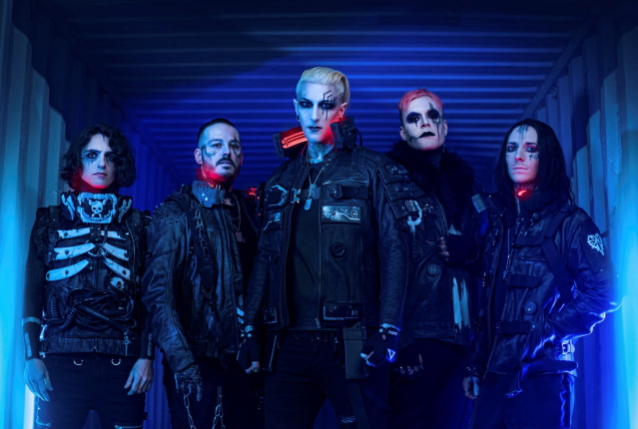 In celebration of Halloween, MOTIONLESS IN WHITE has shared the official Jensen Noen-directed music video for the single "Werewolf". The track is featured on the band's acclaimed new album "Scoring The End Of The World", which entered Billboard's Top Hard Rock Albums chart at No. 1 this past June, becoming MOTIONLESS IN WHITE's fifth Top 5 on the chart. The album also landed at #3 on Billboard's Top Current Albums chart, No. 2 on the Top Rock Albums tally, and No. 12 on the Billboard 200, marking the group's second largest sales week ever with 29,500 in total consumption. "Scoring The End Of The World" is also highlighted by the singles "Cyberhex", which trended Top 10 on YouTube, and the follow-up "Masterpiece", which lit up streaming platforms and reached No. 1 at Active Rock Radio earlier this month.

In a recent interview with Alternative Press, MOTIONLESS IN WHITE frontman Chris "Motionless" Cerulli stated about the making of "Scoring The End Of The World": "It was started in 2020, and it came together over the course of about a year and a half. My best friend, and one of the producers on the new record, [ICE NINE KILLS'] Justin deBlieck, lives two hours from Scranton, and I went up to Syracuse, New York and ended up living there for the first couple of months [of the pandemic] and throughout the summer. We worked on all kinds of music, whether it was new record stuff or alternate versions of our songs. Then, in July of 2021, I went and worked with the other producer on the record, my other best friend, Drew Fulk. A large portion of the melodies and lyrics were written in that period. We finished recording it in December last year."

Chris also revealed some of the wider world topics covered on "Scoring The End Of The World", including "world leaders failing to handle the pandemic. Capitalism, which makes us feel like we’re packaged and sold, and our suffering is profited off to make rich people richer," he said. "Corporations are buying housing, and middle-class families can't buy a home anymore. Pharmaceutical abuse. It's one thing after another. There's a small group of people who are benefiting from all of it, and essentially, it feels like we're living in a fucking slaughterhouse where we're the cattle. You also had George Floyd, which shined a massive spotlight on racism and abuse, and most recently you have things like Roe v. Wade."

He added: "When I say 'Scoring The End Of The World', I'm not suggesting an all-encompassing, the-world-is-over Armageddon. Songs such as 'Cyberhex' and the title track do suggest a resistance and revolt, a call to arms, but I'm metaphorically suggesting that the end of the world as we know it is happening, and we are going to step in and forge a new, better positive, forward-thinking world from the ashes. I feel like that started with George Floyd. That really seemed to be a moment where this social movement took place that felt really positive."