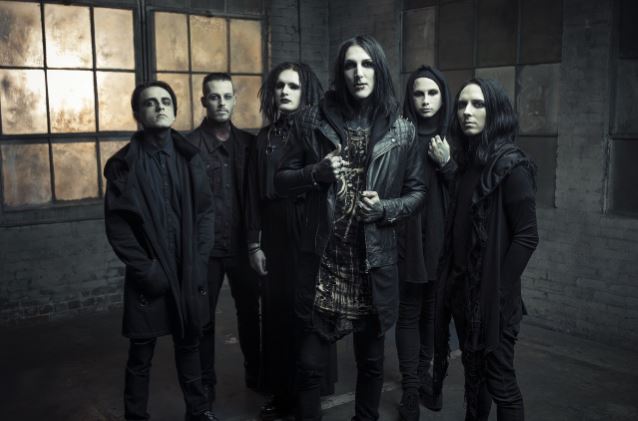 MOTIONLESS IN WHITE To Release 'Graveyard Shift' Album In Early 2017

Regarding the album title, singer Chris Motionless said in a video message (see below): "As you know from all three of our records, we always choose a title that's incredibly personal to the band, and this one is absolutely no exception.

"We really were trying to come up with a title that we felt represented something about the band that we are most proud of, and to us, that has always been our unwavering dedication, passion and work ethic towards all of what we do.

"We treat this very seriously. We, as time has gone on, seem to become more and more passionate about what it is to be in a band and create music and really just put forth our form of art. However, since the inception of the album title, it's sort of diffused in my thought process to be… that I feel like it's more than just about our own personal accomplishments and more coming from a place of respect, admiration and a mutual understanding to people all over the world who share that dedication and share that drive, and people who are out there every day just busting their ass and shoveling shit to basically either survive or, like us, chase their dream.

"We wanted to really have a title that we felt not just represented us but was less of an acknowledgment of our own accomplishments and more just a dedication to people who we feel are similar to us in that we work hard and that we give everything that we have to survive or chase our dreams."

In addition, MOTIONLESS IN WHITE has announced a contest to fan-source the cover art for "Graveyard Shift". The competition is open to fans and artists worldwide. They want fans to capture the spirit of the title by creating their interpretation in their own original artwork. There will be a prize of $2,000 for the winning overall entry. Entries will be submitted to a private site and reviewed personally by the band. The winning design will be featured as the official album artwork on the upcoming album. The chosen winner will receive their cash prize and one round-trip ticket to attend a private listening of the album with the band. MOTIONLESS IN WHITE will also be showcasing 24-plus designs to promote their upcoming album throughout the duration of the contest. Featured designs for promotional use will be awarded $150 per design. All entries receive full credit for their work.

Additional competition and entry submission details can be found here.

MOTIONLESS IN WHITE earlier in the year released a music video for the song "570", directed by Jeremy Danger and Travis Shinn. The track marked the band's first new release since 2014's "Reincarnate", which debuted at No. 1 on Billboard's Top Rock Albums chart as well as at No. 9 on The Billboard 200.

Founded in 2005, MOTIONLESS IN WHITE has won over audiences worldwide with its aggressive music and arresting imagery. The band — which consists of lead singer Chris Motionless, guitarists Ryan Sitkowski and Ricky Horror, keyboardist Josh Balz, bassist Devin "Ghost" Sola, and drummer Vinny Mauro — has proven a ferocious and inventive live act, earning an increasingly fervent fan following via countless headline shows, festival sets, and tours alongside such iconic acts as SLIPKNOT, LAMB OF GOD and A DAY TO REMEMBER, among others.