Florida death metal veterans SIX FEET UNDER will celebrate the 21st anniversary of their debut album, "Haunted", by performing the LP in its entirety on the "X-Mas in Hell Tour 2016" in Germany.

Comments SIX FEET UNDER frontman Chris Barnes: "Hard to believe it's been 21 years since the release of our first album, 'Haunted'…

"If you are going to be anywhere near to these shows… run, jump, crawl… do whatever you have to do and come and see these shows motherfucker. It's gonna be sick!"

Support on the "X-Mas in Hell Tour 2016" will come from ACID DEATH, DEATH BED CONFESSION and FROM THE SHORES.

SIX FEET UNDER recently finished mixing its new album with producer Chris "Zeuss" Harris for an early 2017 release. Barnes called the effort "the most brutally intense, groove-laden masterpiece we've ever put together!"

The fourth installment of SIX FEET UNDER's "Graveyard Classics" series, this time paying tribute to two of metal's most heralded legends — IRON MAIDEN and JUDAS PRIEST — was released in May. Titled "Graveyard Classics IV: The Number Of The Priest" and mixed by Jesse Kirkbride at Kirkbride Recordings in Cape Coral, Florida, the album was comprised of five JUDAS PRIEST covers (side A),and six IRON MAIDEN covers (side B),handpicked by Metal Blade Records CEO Brian Slagel. 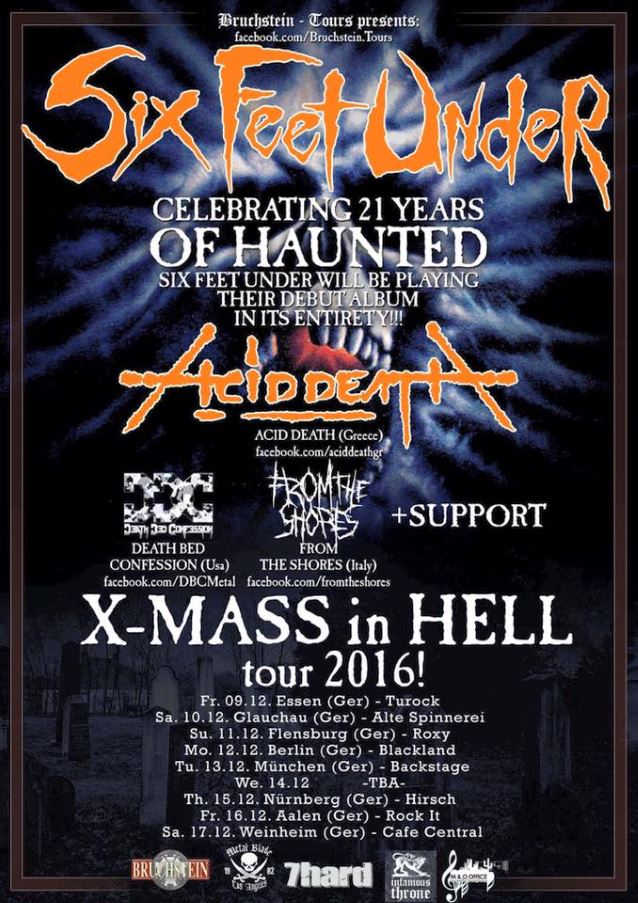