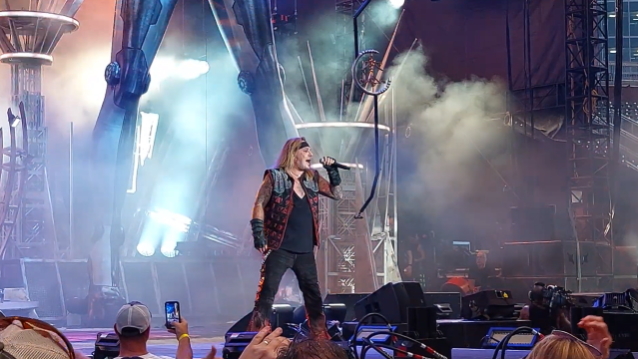 Due to an injury, MÖTLEY CRÜE drummer Tommy Lee played only the first five songs of the band's much-anticipated comeback performance at "The Stadium Tour" kickoff show earlier today (Thursday, June 16) in Atlanta, Georgia. Lee made it through "Wild Side", "Shout At The Devil", "Too Fast For Love", "Don't Go Away Mad (Just Go Away)" and "Saints Of Los Angeles" at Truist Park before announcing to the crowd that he broke several ribs days earlier, forcing him to hand over the sticks for the remainder of the performance to Tommy Clufetos (OZZY OSBOURNE, BLACK SABBATH).

"Okay, well, anyway, what I've gotta tell you is about 14 days ago, I fuckin' broke not one, not two, not three, but four fuckin' ribs right here.

"I wish I had a fuckin' badass story, like me and Connor McGregor fuckin' scrapping out in some fuckin' bar or something. But I don't," he continued.

"Anyway, I hope you guys have a fucking great time. And my boy Tommy Clufetos back here, he's gonna help me get through this. 'Cause the doctors told me, 'No playing, bro. No playing.' And I was like, 'Are you fucking high, bro? We've got a fucking tour to do.' So anyway, I ain't fuckin' sitting out for shit. My boy's gonna help me out here, and I'll see you guys later. On with the goddamn show."

Clufetos stepped in for "Live Wire" and finished the band's set, which included a surprise guest appearance by Machine Gun Kelly on the song "The Dirt". Lee rejoined his bandmates for "Home Sweet Home" toward the end of the show.

Lee has since issued the following statement regarding his injury: "Man ya'll ain't gonna believe this shit!.... I broke 4 fucking ribs! But I've been resting and healing and even though the doctor tells me I shouldn't play at all, you know I'm stubborn and I'll beast through the pain every show for as many songs as I can!

"And have no fear, my boy Tommy Clufetos is here to help me out until I'm back at 100%...we've all been waiting years for this moment and there's no way I'm missing this! On with the show!"

Clufetos is MÖTLEY CRÜE bassist Nikki Sixx's bandmate in a project called L.A. RATS. The quartet, which also features Rob Zombie and John 5 (ROB ZOMBIE, MARILYN MANSON),came together last year expressly to record a cover of "I've Been Everywhere" for the soundtrack to the movie "The Ice Road".

Breaking News: Motley Crue’s Tommy Lee takes the stage at The Stadium Tour but mid-set goes to the mic and says after 2 and a half years of waiting for this show he broke a few ribs recently and the doctors told him not to play. He promised to perform anyway #TheStadiumTourpic.twitter.com/VjKj9bVQMs