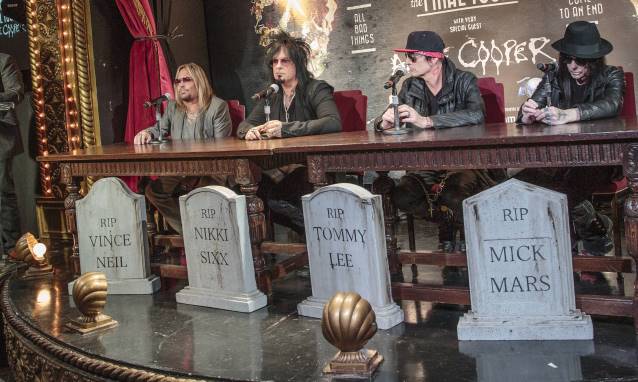 Speaking to Artisan News at yesterday's (Wednesday, April 23) Revolver Golden Gods event at Club Nokia in Los Angeles, producer James Michael — who sings for MÖTLEY CRÜE bassist Nikki Sixx's SIXX: A.M. project — revealed that he has been tapped to helm what may very well turn out to be the CRÜE's final song.

"As we know, the CRÜE is getting ready to hang it up. And we discussed for a while doing a final song," James said (see video below). "And that's a tall order. There was a lot of pressure on us to make sure that we did it right and that we celebrated everything that they were known for. So I think we've done it. I'm actually tracking drums with Tommy [Lee] tomorrow. And it's an outstanding song. I think it's gonna be an absolutely amazing way to go out swinging."

During an appearance on the March 3 edition of Eddie Trunk's show "Trunk Nation" on SiriusXM's Hair Nation, MÖTLEY CRÜE guitarist Mick Mars revealed: "I just wrote a new song with Nikki, and we're gonna be finishing it up, like, within the next couple of months. There'll be a new single [released in time for the upcoming tour]."

Sixx in January said that that it's unlikely that the band will release another full-length album of new material and will instead make select tracks available via special projects in order to maximize their impact.

"My take on it right now and the way that things work is very much reverted back to the '60s where people buy singles," Mars told Trunk. "I don't want an album full of fillers. And that's why I said I would release [a solo] EP or singles."

Sixx told the Rapid City, South Dakota radio station 95.1 KSKY: "We have music written, [but] it's not put together yet." He added: "It's hard, to be honest with you, to spend six [or] nine months to write eleven songs — all those lyrics… everything… the vocals, the guitars, the bass, the sonics, the mixing, the mastering, the artwork… You put it out and nothing [happens], because now people cherry-pick songs. So we go, 'Why don't we write songs and find vehicles to get one, two or four songs to ten million people rather than eleven songs to a hundred thousand people. That's how we're thinking. I don't know if it's right or wrong, but that's how we're thinking."