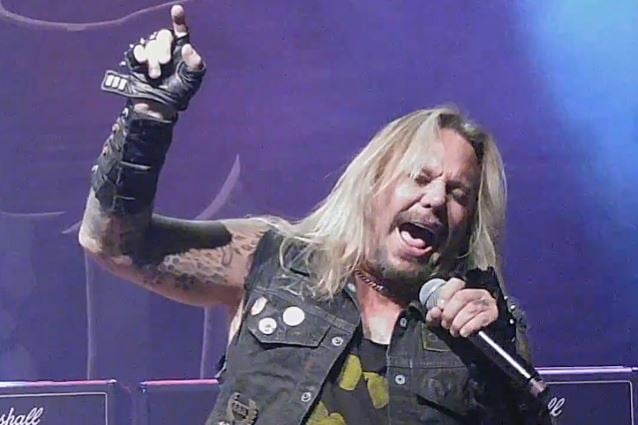 MÖTLEY CRÜE singer Vince Neil spoke to Telegram.com about the band's decision to call it quits after one last show at the Staples Center in Los Angeles following an eighteen-month tour that saw the band performing to packed houses all over the world.

"I think I was the only one in the band who got emotional. It all kind of came together that night. 'This is it,'" Vince said about the final performance, which took place on December 31.

"There were a lot of emotions that came into my head," he added. "It really was surreal — know what I mean?"

Neil also talked about his "The Legacy Continues Tour" where he performs classic MÖTLEY CRÜE hits, as well as select cuts from his three solo albums, backed by a band that includes SLAUGHTER's Jeff Blando on guitar and Dana Strum on bass, with Zoltan Chaney on drums.

Neil's first solo album, "Exposed", came out in 1993, reaching No. 13 on The Billboard 200 chart. His follow-up effort, "Carved In Stone", arrived two years later. Neil's third and latest solo album, "Tattoos & Tequila", was released in 2010 and included two originals along with covers of classics songs from AEROSMITH, SCORPIONS and SWEET.

"Look, I'm going to always be the guy who was in MÖTLEY CRÜE, but my first solo record, with [the song] 'You're Invited (But Your Friend Can't Come)', was over a million seller, so a lot of people enjoyed it and 'Sister Of Pain' and many of those songs," Neil told The Michigan City News-Dispatch. "I'm looking forward to recording more stuff, but I'm really a road singer. I love giving cool, fun performances with a big look."

MÖTLEY CRÜE's farewell concert film, "The End", hit U.S. cinemas earlier in the year and was made available through leading cable, fiber and satellite television providers in the U.S. and Canada last month.