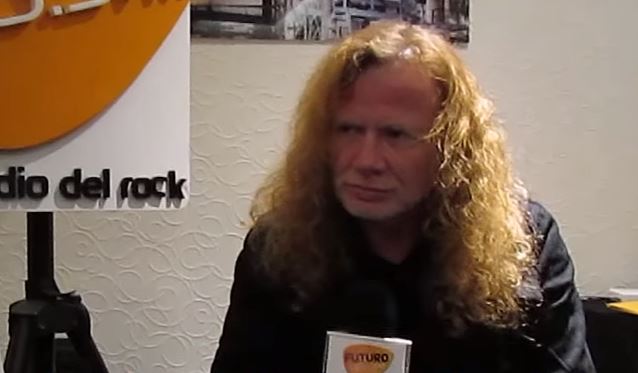 DAVE MUSTAINE On MEGADETH Lineup Changes: 'If Somebody Doesn't Wanna Be Here, Then F**k 'Em!'

Chile's Radio Futuro recently conducted an interview with MEGADETH mainman Dave Mustaine. You can now watch the chat below. A couple of excerpts follow (transcribed by BLABBERMOUTH.NET).

On whether he sees MEGADETH's new lineup as a "new beginning" for the band:

Mustaine: "Kind of. But I think people make too big of a deal about lineup changes. IRON MAIDEN had a bunch of lineup changes. They've had more than one singer; they've had three singers. We've only had one. SLAYER's had lineup changes, METALLICA's had lineup changes, so I don't really put too much importance on lineup changes. If somebody doesn't wanna be here, then fuck 'em! You know what I mean? But I look at it like this: Kiko Loureiro [guitar] has been a breath of fresh air, and Dirk Verbeuren [drums] was recommended by Chris Adler, who played on the 'Dystopia' record and is a great friend of mine and the band. And the record is very exciting. I think that it's really given us a breath of fresh air, going back to what we wanted to do: playing thrash music. After 'Risk', I said something to Marty Friedman. I said, 'We've gotta go back to our roots,' and he quit. So it kind of shows you where he was going — to Japan. And, for me, slowly but surely, we changed the band and got the direction back to where we're at with [MEGADETH's latest album] 'Dystopia'. And I'm excited to see what the next record's gonna be like."

"I don't wanna make any changes anymore. I want this to be my band lineup until the end."

On whether Dirk Verbeuren is a permanent member of MEGADETH now:

Mustaine: "Yes, Dirk is the drummer now. We already announced that he was the drummer, so… It's funny. A couple of people have already asked me that, so that's not a peculiar question for you to ask. When you say a guy is in the band, he's a bandmember, that means he's in the band. It wasn't like with Chris [Adler]; Chris was a session guy, and he's always been in LAMB OF GOD. And although the idea would have been great for him to finish up with LAMB OF GOD and join MEGADETH, we don't wanna have somebody that's in two bands, because I think it's just too demanding, with as much as we tour and with as much as LAMB OF GOD does, or another band would tour. Because Chris has a wife and baby. And part of the reason why my kids turned out so good was I spent a lot of time with them. I think a lot of people thought my kids would end up being like total rock-star brats, and they're not."

On MEGADETH's plans for the coming months:

Mustaine: "Kiko is expecting twins, and we're going to tour until the end of this year, probably the middle of October, and then take some time off and get ready for next year. Usually, when we have been out on tour for a while, we start writing little bits and pieces for the next record. And I'm getting to that point right now where I'm ready to start goofing around on the guitar. Because when I'm done in the studio working on a record, the last thing I wanna see is a guitar, because that's all I do — eat, breathe, sleep, think — is guitar, all day long, so that I can have a fresh new start. You know, when you go into a school room and you look at the blackboard, and it's covered with yesterday's lesson, it confuses people. So I like a fresh start. And I think right now we're at that point. Now that we have Dirk, we know we have a permanent drummer, we know we have a full-on, real, complete band, and we're gonna start playing some new stuff."

The fall 2016 North American leg of MEGADETH's "Dystopia" world tour kicks off in Casper, Wyoming on September 20 and will take them across the U.S., visiting 16 states with special guests AMON AMARTH, SUICIDAL TENDENCIES and METAL CHURCH.