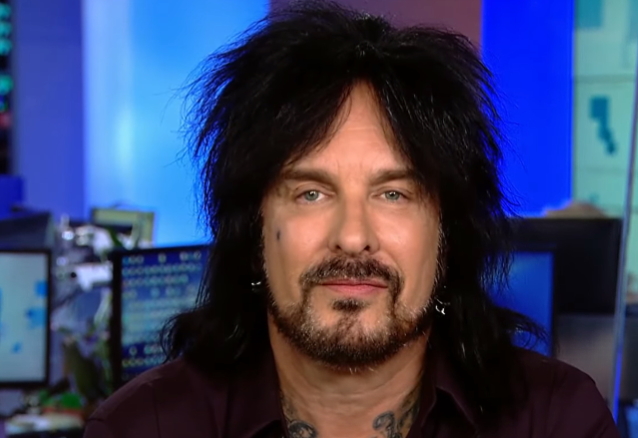 Nikki Sixx is celebrating the 20th anniversary of his getting sober.

The 62-year-old MÖTLEY CRÜE bassist credited his mental tenacity with helping him live his life without drugs or alcohol.

He wrote: "Some people will try and kick you in the nuts, steal your money, stab you in the back, guaranteed to let you down, sabotage yer life, not believe in you and gossip that you'll never make a day without drugs or alcohol. And do you know what you're gonna do? YOU'RE GONNA STAY SOBER ONE DAY AT A TIME. You are the miracle, the one that breaks the addiction chain, the one who is a living amens. The one who has altered your family history. You will live in gratitude for those that never thought you'd stay sober or make it out alive BECAUSE THEY MADE YOU STRONGER and you know how to forgive assholes. And when you see people who are still suffering / treading water or gasping for air, be sure to throw them a life vest. Because we give back now to those that are still afflicted and hope they too pass it on.#SobrietyRocks #20Years".

Sixx struggled with substance abuse for years and was even supposedly declared clinically dead after a heroin overdose in 1987 made his heart stop for two minutes. He has since become actively involved in a recovery "program," which he credits for helping him transform his life and relationships.

"By letting go of self and ego, working a program that connects you to a higher power and giving back to those still struggling are just some of the important things you learn through sobriety," Sixx wrote when he celebrated nine years of sobriety in July 2013. "You get to repair the damage done from drink, drugs and horrific behaviors (that broke people's hearts who loved you."

The rocker, who detailed his near-fatal drug addiction in the best-selling book "The Heroin Diaries", added: "For me, taking away the substance just gave [me] an honest view of who I had become and then the healing started. I do believe without any program to help, many are just dry drunks and there is always a danger of them going out again. I've been there. It's not pretty. This is no joking matter to me, so I take it seriously."

Asked by The Guardian about a diary entry in "The Heroin Diaries" where he described himself as an "alcoholic heroin and coke addict getting into pills" and how he spent Christmas Day 1986 naked under the Christmas tree, clutching a shotgun, Nikki said: "Well, if you shoot enough cocaine, you go into a kind of psychosis, and I believed people were coming to get me. Scary place, let me tell you. It reads like some kind of a dark horror story or bedtime thriller. But in real life, the trauma that psychosis puts your body through is on a cellular level. You believe that you’re going to have an experience even though it's not really happening. I can remember those, because you come out of them, and it's scary. But you can only imagine what it would be like to be insane and not come out of it, or a version of that, like dementia."

"It was rough for everybody after that accident," Neil told USA Today last year. "I tried to stay sober for a few years, but it's tough when there's no support system around you. They were still doing coke and drinking and carrying on, and I just couldn't be a part of it."