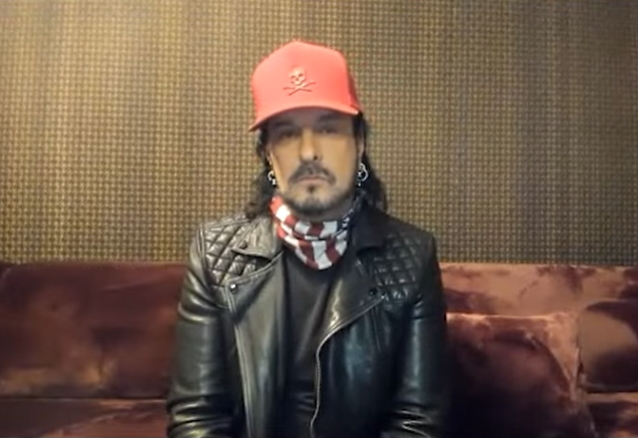 MÖTLEY CRÜE's NIKKI SIXX: 'We Never Intended On Getting Back Together'

Nikki Sixx has once again said that the chance for MÖTLEY CRÜE to headline a U.S. stadium tour was the primary reason the band decided to cancel its retirement.

CRÜE fans who shelled out for the band's 2014/2015 "farewell" tour were led to believe that the group would never return after playing its final concert on December 2015 at the Staples Center in Los Angeles. The band touted the signing of a pre-tour "cessation of touring" agreement as cementing the fact it truly was the end of CRÜE's life on the road.

Speaking to the 98.3 CIFM radio station about the CRÜE's decision to reunite for next summer's stadium tour with DEF LEPPARD and POISON, Sixx said (as transcribed by BLABBERMOUTH.NET): "It was pretty interesting. We knocked it on the head because we felt like we had said everything we wanted to say. We felt that we were young enough where we had time left on the clock to do other stuff. And I think it ended in a really good way.

"We never intended on getting back together," he continued. "It was the movie [MÖTLEY CRÜE biopic 'The Dirt']… We always knew we were gonna do the movie. And then getting in a studio and making music was, like, 'That was fun.' I was, like, 'Yeah, we'll do some songs for the movie.' And we got the movie. 'It's been great.' High five. 'Tommy [Lee, MÖTLEY CRÜE drummer], call me for sushi.' And it started — it just started rolling and rolling. Now there's, like, 83 or 84 million people who've seen the movie, and the phone calls started coming in from around the world.

"We owed it to ourselves to have that conversation, 'cause if three of us were, like, 'Let's go do it' and the fourth was not, that's what the contract was about," he explained. "We couldn't leave two guys behind and go out and have two versions of MÖTLEY CRÜE. So it was an exciting time, something to celebrate. And if there was any hem and hawing, it was around the idea of going and doing arenas. We've done arenas, we've done festivals. We just felt like it isn't gonna get any bigger than how we ended it. And then came the, 'No, no. They wanna do stadiums.' And we were, like, 'Ah, well, that's a little different conversation.' 'And DEF LEPPARD wants to do it with you. The whole thing.' So then it was us and DEF LEPPARD talking, and what do they see. We've played many shows together before, so it was fantastic. And then I think eight [shows] went on sale and sold out, eight more sold out, eight more sold out, and everyone was, like, 'This is gonna be a great run.' And I figured that was gonna be it. And then COVID came and knocked it on its heels, like everybody else, or a lot of people. And then we decided not to tour this year because we weren't comfortable enough yet personally, and maybe it wasn't the right thing for the fans, in our opinion, or for our crew. So during that time, we got to start talking more [about], 'What's Europe look like?' 'You know what? We love Japan. Wow. What a show in Japan.' MÖTLEY CRÜE and DEF LEPPARD. If it's POISON and Joan Jett, they stick with us. And those are huge shows in Australia.

"So that's where it is," Sixx added. "And then this fucking mutation of COVID keeps happening. So we're, like, 'Okay, we're doing America. We've got our protocols. We know exactly how we're gonna do it. What's gonna happen in '23?' And we don't know. I've heard omicron is a lot more contagious but it's also a weaker strain so that if people do get it, it's more like a headache or a stomache for a day, especially for vaccinated people. So there's some talk about that's a positive; it's weakening. So we're keeping our eye on all the information out there. And how do we get a stadium tour to Europe, how do we get it to Japan. There needs to be the right safety protocols."

"The Stadium Tour" was originally scheduled to take place in the summer of 2020 but ended up being pushed back to 2021, and then to 2022, due to the coronavirus crisis. Nikki is confident that the trek will finally happen next year. "100 percent — June 19th [of 2022], this tour kicks off in Atlanta, Georgia," he said. "Man, I can't wait. I miss it. My favorite thing is band rehearsal. So all of May, we rehearse and we break down the songs and we get to hang out. Just like we did in 1981, man. There's nobody there; there's nobody coming in and interrupting — it's just the four of us set in a circle. And then we turn and face you and go for it live."

Asked what fans can expect to see from MÖTLEY CRÜE's stage show this time around, Sixx said: "We have some very, very cool things that are in development, let's say. Different than anything we've done before.

"Here's my thought on pyro, by the way. I love pyro," he continued. "If you know anything about me, you're, like, 'Yeah, Nikki used to light himself on fire.' You're not talking to a guy who doesn't like fire. But you're talking to a guy who every time I turn on a baseball game or a football game or some D-level band, they've all got this, like, fire goes up, fire goes down, fire goes up, fire goes down. And I just feel like it's kind of become… For us, we were covered in fire retardant. We had fire shooting at us. I had a flame thrower. So unless you're gonna go the RAMMSTEIN route, who I love, you may need to rethink what can we do to blow your mind. And that's where we're at right now."