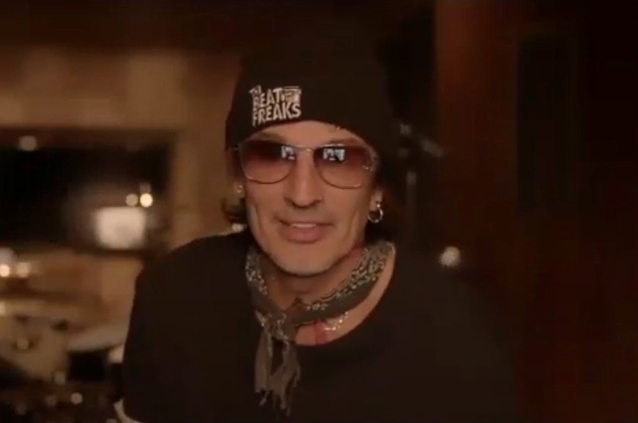 In a new interview with Jason Rockman of Canada's iHeart Radio, MÖTLEY CRÜE drummer Tommy Lee was asked how he is dealing with the coronavirus pandemic. He said: "I hate to say this, because it's weird to say, but it's sort of just… I mean, yes, a lot of bad stuff happened, but for a guy who doesn't really leave his house that much and is often in my studios here, I guess it hasn't changed much for me. Some things have, obviously, but for the most part, dude, I've just been here…"

Tommy, who will release a new solo album, "Andro", in October, continued: "It's kind of fucked up, 'cause I called my manager a couple of weeks ago and I'm, like, 'Dude, I almost have another record done.' And he's, like, 'Woah! Hold up. This one's not even out yet.'

"Also, and I tell this to people, because I think this is important," Lee added. "I think another thing that has happened that's fucking really cool that I've noticed for me is that, and this is probably true for many people, our daily lives are fucking hauling ass, pretty much, for the most part — whether you're working, whatever you're doing, you're pretty much flying. And the pandemic has, for me, slowed me down and almost stopped to do some really cool introspection — whether it's your family life or a relationship or how you are as a person, it's really gotten me to slow down, almost stop and really dial certain things in that I've been avoiding, or doing things more that I should be doing more. It's cool, man. There's been a lot of pluses about it. Unfortunately, [also] a lot of negatives, but that's [like that] with everything."

In June, Lee released two new solo songs. "Knock Me Down" is a collaboration with Killvein, while "Tops" features South African rapper Push Push. Other features on "Andro" include a Prince cover from Lukas Rossi (ROCKSTAR SUPERNOVA),Josh Todd (BUCKCHERRY),Brooke Candy and Mickey Avalon.

MÖTLEY CRÜE's "The Stadium Tour" with DEF LEPPARD, POISON and JOAN JETT & THE BLACKHEARTS " was originally scheduled to take place this summer but ended up being pushed back to 2021 due to the coronavirus pandemic which is sweeping the globe.