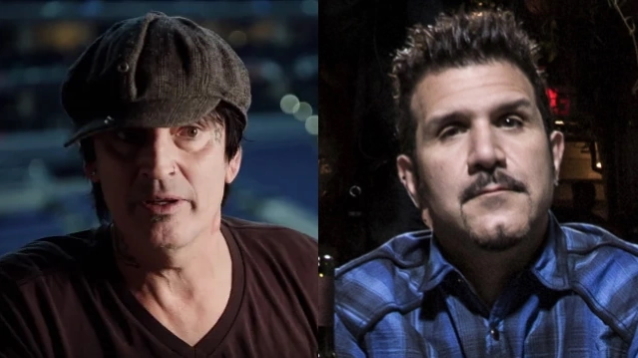 MÖTLEY CRÜE's Tommy Lee and ANTHRAX's Charlie Benante have both reacted with humor to comments from President Donald Trump on Thursday that injecting disinfectant and exposure to ultraviolet rays could help people with the coronavirus.

Trump made the comments during his daily news briefing at the White House, after a discussion on work by government researchers on the effect of heat and sunlight on the coronavirus.

Without naming any particular disinfectant brands, he said: "I see the disinfectant where it knocks it out in a minute. One minute! And is there a way we can do something, by an injection inside or almost a cleaning? Because you see it gets in the lungs and it does a tremendous number on the lungs, so it'd be interesting to check that. So, that you're going to have to use medical doctors with, but it sounds interesting to me."

Medical doctors have been quick to denounce the idea of injecting cleaning products to clear the virus, saying that the president was endangering the public's health.

"Trump is absolutely wrong and irresponsible," Dr. Eugene Gu, whose laboratory is involved in coronavirus testing, wrote on Twitter, adding, "Clorox, Tide Pods and Lysol will kill coronavirus. No question about it. But if you are infected then the coronavirus is inside your cells. If you use any of those disinfectants to kill the coronavirus in your own cells then you'll die right along with the coronavirus."

Earlier today, Lee shared a TikTok video of someone using a Donald Trump toilet brush bowl to clean his toilet. This prompted Benante to respond by posting a meme for "Trump-recommended" Clorox chewables.

Lee has repeatedly voiced his displeasure with Trump, including last August when he implored the president to "wake the fuck up" after he blamed the Dayton and El Paso mass shootings on video games and mental illness.

In December 2018, Tommy referred to the 45th U.S. president as an "asshole" and labeled his supporters "dumbasses." A year earlier, he called the president "a fucking idiot" and said the people who voted for him are "dickheads."

After Trump was elected president in November 2016, Lee expressed his disbelief on Twitter, writing: "What the actual fuck is happening?"

In November 2018, Tommy lambasted Trump for blaming California's wildfires on poor forest management. "Can you be anymore insensitive you fucking moron" Lee tweeted.

In recent months, Benante has sent out multiple tweets that were critical of the Trump administration. In January, the drummer implied that Trump authorized the killing of Qasem Soleimani, the commander of Iran's Islamic Revolutionary Guards Corps Quds Force, to distract the public from his impeachment trial.

Fox host: Trump says he was being sarcastic when he talked about injecting disinfectants. Your thoughts?

Bret Baier: "Well, that’s not how it looked in the briefing... it didn’t seem like it was coming off as sarcastic when he was talking and turning to Dr. Birx on the side" pic.twitter.com/XbdJXLg2WT