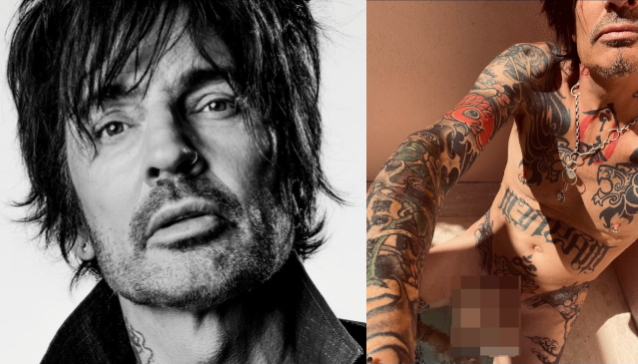 The 59-year-old MÖTLEY CRÜE drummer shared a picture of his tattooed body sitting down on what appeared to be the edge of a bath on Thursday. Although the angle cut off the top half of Lee's face, the image shows Tommy wearing nothing but a chain necklace and nipple rings as he exposed his genitalia to his millions of followers on Instagram, Twitter and Facebook.

Tommy's wife Brittany Furlan was among the people who commented on his post, writing "OH MY GOD" next to the image on Instagram.

Tommy later followed up his original post with an image of an elephant staring at a naked male model, while swaying its trunk. It was captioned, "How do you breathe through that little thing??" apparently a reference to the size of Lee's manhood.