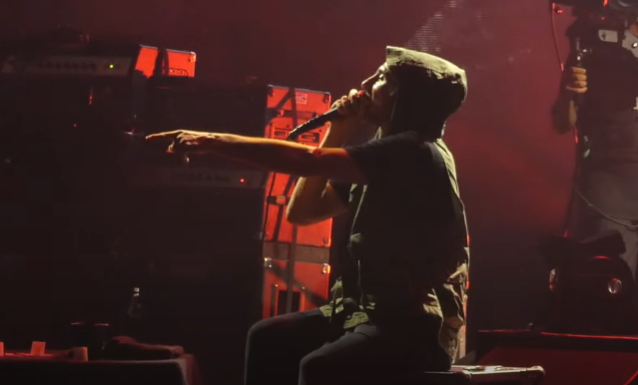 RAGE AGAINST THE MACHINE has been forced to cancel the August and September 2022 European leg of the band's tour.

The cancelation comes a month after singer Zack De La Rocha appeared to injure his leg and had been performing while seated ever since.

"RAGE AGAINST THE MACHINE will be finishing their run at Madison Square Garden on August 11, 12 & 14 and then Zack must return home for rest and rehabilitation. The flights, travel time, and rigorous schedule in the UK and Europe are simply too much of a risk for a complete recovery.

"We are so sorry to all of our fans who have waited years to see us and hope to RAGE again soon.

"Please contact your point of purchase for refunds to any headline shows."

De La Rocha reportedly injured his leg four songs into the band's set at Chicago's United Center on July 11, while Zack and his bandmates were performing "Bullet In The Head", a classic song from the group's 1992 self-titled debut album.

RAGE AGAINST THE MACHINE kicked off its long-delayed "Public Service Announcement" tour on July 9 in front of roughly 30,000 fans at Alpine Valley Music Theatre in East Troy, Wisconsin. During the show, RAGE AGAINST THE MACHINE decried the Supreme Court's decision to overturn Roe v. Wade and end the federal constitutional right to an abortion. De La Rocha repeatedly screamed "freedom" while a video screen flashed with statements about gun violence, black maternal mortality and abortion access.

RAGE AGAINST THE MACHINE's comeback tour features support from RUN THE JEWELS.