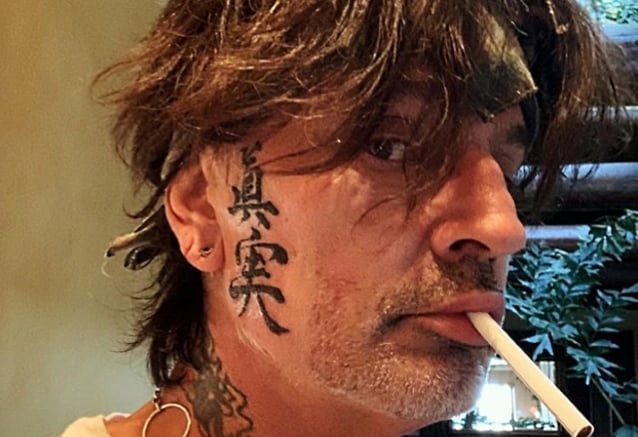 Tommy Lee has unveiled a couple of new face tattoos.

The MÖTLEY CRÜE drummer took to Instagram this weekend to show off the fresh ink, courtesy of Mario Barth Tattoo Studios. One of the new tats, inked on his right cheek, appears to be a Japanese word or phrase. Lee also added fading dots over his left eye as well as what appears to be an upside down backwards treble clef and a bass clef making a heart on around his left temple.

Lee's CRÜE bandmate reacted to the photos of Tommy's new tattoos, writing on Instagram: "Looks awesome. I need a tune up with some of my ink too. Great" ROB ZOMBIE guitarist John 5 also weighed in, writing: "That's so cool. I love it."

Post Malone recently added a new inking of a buzzsaw dripping with blood. He also has the phrase "Always Tired" tattooed under each of his eyes.

Back in 2014, Moody's FIVE FINGER bandmate Jason Hook got the word "Driven" added to his right temple.