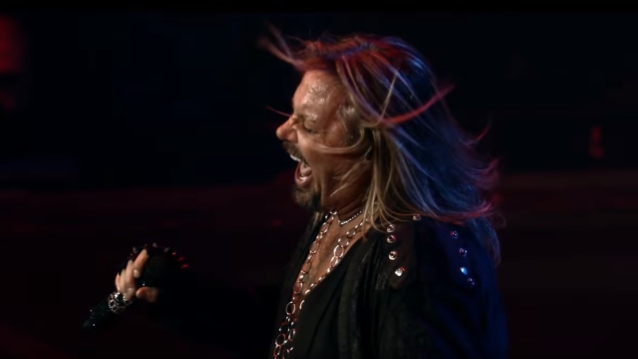 Vince Neil says that MÖTLEY CRÜE is very much an active entity despite the fact that the band completed its final tour more than three years ago.

Vince went on to say that the upcoming release of the MÖTLEY CRÜE biopic "The Dirt" doesn't make him wish that the band could return to the road in support of the film.

"The movie's just another cool MÖTLEY CRÜE thing, and it kind of really has nothing to do with touring," he explained. "It's a movie. Who knows? In another four or five years, maybe we'll put something else out. I don't know. We're just gonna have to wait and see. Because I'm busy touring right now. I know the other guys have different projects too. And we'll see if we can fit in people's schedules whatever else comes up."

According to Vince, "The Dirt" turned out to be a much better movie than he initially expected.

"I was really pleasantly surprised, because I didn't know if it was gonna be this really low-budget film," he said. "Because you can make really bad films very easily. But after the first 10 minutes of watching the movie, I forgot it was about us and I just was enjoying a really good film."

Neil added that he had no trepidation about having an actor portray him on the screen in a movie based on MÖTLEY CRÜE's 2001 biography.

"It wasn't me that was nervous; it was actually the guy that played me [Australian-born actor Daniel Webber] who was nervous," he said. "He wanted to make sure he did a really good job. And he did. I think each guy that played each of the bandmembers pulled it off — I mean, exact. You get everybody's personalities right there on film. It's pretty neat to watch."

"The Dirt" will premiere on Netflix on March 22. The soundtrack will arrive the same day and features a string of CRÜE classics, as well as three new songs and a cover of Madonna's "Like A Virgin". The first of the new tunes, "The Dirt (Est. 1981)", a collaboration with rapper Machine Gun Kelly, was released last month.

"The Dirt" was picked up by Netflix after being previously developed at Focus Features and before that at Paramount.