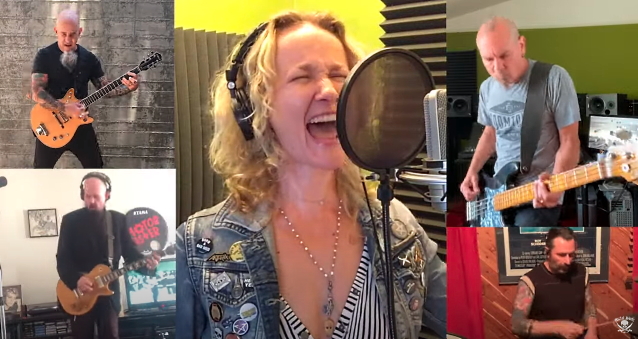 Rock supergroup MOTOR SISTER — featuring Jim Wilson (MOTHER SUPERIOR),Scott Ian (ANTHRAX),Pearl Aday (Scott's wife and daughter of actor/musician Meat Loaf),Joey Vera (ARMORED SAINT, FATES WARNING) and John Tempesta (THE CULT) — recently recorded a cover version of the AC/DC classic "Girls Got Rhythm". A music video for the track, filmed while the bandmembers were in quarantine, can be seen below.

This past March, MOTOR SISTER entered the studio to begin recording its second album. The disc is being produced by Jay Ruston (ANTHRAX, STEEL PANTHER) and is tentatively due before the end of the year via Metal Blade Records.

Since the release of MOTOR SISTER's debut, "Ride", in 2015, the group has been more than busy with its other commitments: Ian has been touring non-stop with ANTHRAX; Tempesta has been on tour with THE CULT; Vera has been touring and working on new music with ARMORED SAINT; Aday released a solo album, "Heartbreak And Canyon Revelry"; and Wilson released an album with drummer Phil Jones.

MOTOR SISTER was originally assembled to jam for Ian's 50th birthday party. Thanks to Aday, all it took was a quick phone call, and the stage was literally set for Scott's dream gig. "I wanted to cherry-pick a set list of my favorite MOTHER SUPERIOR songs and get these guys together and have the concert at my house," Scott said of the event that eventually led to an album — "Ride", comprised of MOTHER SUPERIOR covers — and the formation of MOTOR SISTER.

"The simple goal for the second MOTOR SISTER album is to make the most kick-ass, high-energy rock and roll record ever," Wilson previously said.