MOTÖRHEAD, in partnership with developer Haemimont Games, is delighted to announce its own videogame experience, "Motörhead Through The Ages", is available now. Included as part of "Victor Vran: Overkill Edition", "Motörhead Through The Ages" is available for the PlayStation 4 computer entertainment system, Xbox One, the all-in-one games and entertainment system from Microsoft, Windows PC and Mac.

Take a journey with "Motörhead: Through The Ages" in the all-rock trailer below.

Conceived in 2014 by longtime MOTÖRHEAD fan Achim Heidelauf, Lemmy Kilmister and the team at Haemimont, "Motörhead Through The Ages" is a videogame experience like no other. An expansion to the critically acclaimed "Victor Vran", "Motörhead Through The Ages" includes some of the band's most iconic tracks as you've never heard them before, uniquely mastered for the game from the band’s original studio recordings and accompanied by a collection of worlds, weapons, special abilities and bosses inspired by MOTÖRHEAD.

"Lemmy was so excited about this game, and when he wasn't having the time of his life, he would always be sending new designs over to the game studio," said MOTÖRHEAD guitarist Phil Campbell. "I'm delighted with the result, as I know Lemmy would have been, and for any MOTÖRHEAD fan, this is another amazing way to connect with the band."

"'Motörhead Through The Ages' lives and breathes MOTÖRHEAD, head to toe!" said Jens Drinkwater, Global Merchandising Services, "The team at Haemimont took incredible care to deliver a truly authentic experience, with the help of the band I have no doubt this has been accomplished."

Fans of the world's greatest band can purchase the Motörhead Collector's Edition — full to the brim with exclusive MOTÖRHEAD swag and enshrined in a stunning Snaggletooth embossed collector's tin – from the official Wired Productions Store. 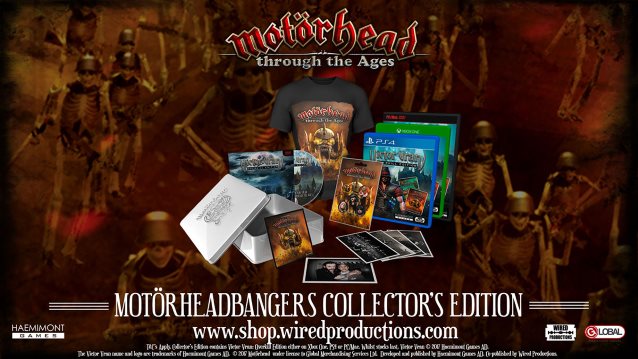