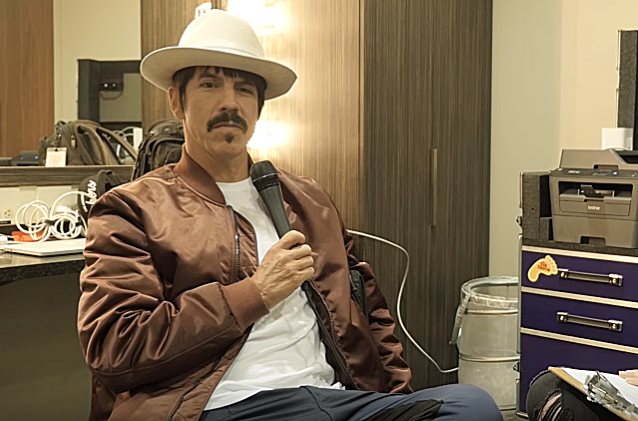 RED HOT CHILI PEPPERS frontman Anthony Kiedis has commented on Chris Cornell's death, saying it was "crushing to know" that the SOUNDGARDEN singer "was in a painful place in his mind to the point where he could wanna take his own life."

Cornell apparently committed suicide by hanging on May 18 after SOUNDGARDEN played a show in Detroit. He was 52 years old.

Speaking to the Sonic 102.9 radio station, Kiedis stated about Chris (see video below): "Well, he is of our generation, so he's someone that I've been conscious of since, I guess, the mid-'80s. You never expect a contemporary who's alive and well and still playing to suddenly check out like that. So I can't say that I took him for granted, but I just didn't… It was kind of shocking. We have a relationship with him and the rest of SOUNDGARDEN, 'cause we went on tour with them in 1992 with Lollapalooza, and they were just a bunch of sweethearts, and we got to see them constantly."

He continued: "It was nice to see them back together and crushing to know that he was in a painful place in his mind to the point where he could wanna take his own life. And I don't judge him for that, because I don't know that kind of pain. Obviously, it has to be overwhelming in order to wanna leave. So, bless his family. He left the world a better place."

As previously reported, Cornell had a number of prescription drugs in his system at the time of his death, according to a completed toxicology report released by Michigan's Wayne County Medical Examiner on Friday (June 2). But assistant medical examiner Theodore Brown wrote in his post mortem report that Cornell died from hanging and that "drugs did not contribute to the cause of death."

He added, "Based on the circumstances surrounding this death and the autopsy findings, the manner of death is suicide." The examiner noted that Cornell's injuries "were all consistent with hanging, partially suspended by the resistance exercise band."

The report revealed that Cornell had Naloxone a.k.a. Narcan, a sedative called Butalbital, Lorazepam a.k.a. Ativan, a decongestant called Pseudoephedrine and barbiturates in his system when he was found dead. He also had caffeine in his body from No-Doz tablets he had ingested prior to his death.

Cornell had four doses of the anxiety medication Ativan in his system. The medical examiner noted that while the level in his blood was higher than the average dosage, it was lower than the amount associated with those whose deaths have been tied to the drug, which can cause suicidal thoughts.

Reports that Cornell had needle marks on his left arm proved true — but the punctures were from EMTs who administered Narcan in an attempt to revive him.