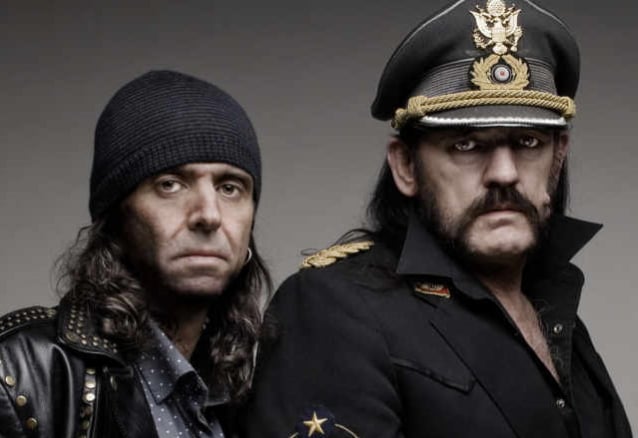 MOTÖRHEAD's PHIL CAMPBELL: How I Found Out About LEMMY's Death

Asked in a new interview with SiriusXM's "Trunk Nation With Eddie Trunk" how he found out about Lemmy's passing, MOTÖRHEAD guitarist Phil Campbell said: "I called Lem on his birthday, as usual, and there was no answer on his phone. So I spoke to [MOTÖRHEAD manager] Todd [Singerman] and said, 'How's Lem doing?' And he said, 'Oh, he's not doing so well. Maybe you and Mick [MOTÖRHEAD drummer Mikkey Dee] should come out and come see him, come cheer him up,' or whatever, and then about 30 minutes later, Todd called me and said the bad news. So he must have gone really, really quick at the end, which is probably the best way."

Lemmy had dealt with several health issues in the last few years of his life, including heart trouble, forcing him to cut back on his famous smoking and Jack Daniels habits.

MOTÖRHEAD canceled a number of shows five years ago, although they did manage to complete one final European tour on December 11, 2015.

"He'd done as much as he possibly could, playing and rocking out to the end," Phil told "Trunk Nation With Eddie Trunk". "I was so proud of him. And he just wanted to carry on. We wouldn't expect anything else from Lem. He was an original."

Although Campbell said some of the final shows were "tough" to get through, he insisted that they were "not bad. It was just that we cocked up a couple of odd songs here and there, but the general gigs, right up to the end, were fantastic," he explained. "But you did feel for Lem, just giving it his all. But he wouldn't be the first person in the world to cock up the odd song. Plenty of us have cocked them up. It wasn't a lot, really. It's probably been overexaggerated. The gigs were really good."

Pressed about the possibility of a Lemmy tribute concert at some point in the not-too-distant future, Phil said: "Yeah, we've been thinking about it for a long time. But we wanna make sure it's done right. People are gonna have to rehearse, and we don't want too many people, and everyone coming on and saying, 'Yeah, I know 'Ace Of Spades',' and then singing the first verse twice.' Stuff like that's happened to me before. It's something that's in our minds. And it's the availability of the right people as well, which is kind of a bit of a nightmare. But one day, we'd like to do something really spectacular. It's gotta be done."

For more than two decades, Lemmy resided in West Hollywood, California after expressing his desire never to live in Britain again. He reportedly spent much of his time alone in the same two-bedroom apartment he had occupied since settling in L.A.

Asked in a 2009 interview with SPIN magazine why he never bought a house in the Hollywood Hills, Lemmy said: "I can't afford it. We didn't sell many albums. I wrote the words to 'Mama, I'm Coming Home' for Ozzy [Osbourne], and I made more from that song than I had from MOTÖRHEAD at that point."