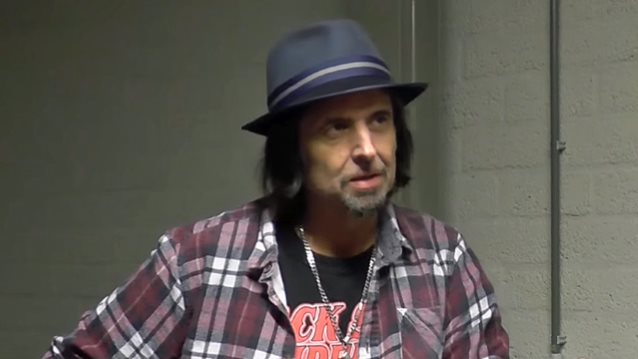 MOTÖRHEAD guitarist Phil Campbell has offered more details about his upcoming book of funny anecdotes and stories that happened during his time with the band.

Asked by Headbangers Lifestyle's Lilo at the end of last year if there are any plans for him to write and an autobiography or have a film made about his life, Campbell responded (see video below): "I don't want a film about my life; no way. I'm working on a book of the funny stuff. I don't want a life story; I just want the funny stuff. [It's] gotta be documented, 'cause some of it's pretty bizarre and unbelievable. It's totally funny, though. [It's a book about] my experiences. It's what would normally not happen if you weren't in this band."

Regarding when fans can expect to see his book released, Campbell said: "I'm seriously working on it now in January. It'll be a year or two [before it comes out], but it'll be worth it."

Asked in a 2012 interview if he has ever considered making a solo album, Phil responded: "Yes, I have thought about it a lot. But I shelved it a couple years ago, because I've decided that I want to write a book about all the insane things that happen on tour. So, I'm trying to compile all of those stories and funny situations. So, at this point, I'm working on that. But, I'm a bit lazy, so it's taken a while. But as far as a solo record, I do have a studio at home, it's just hard finding the time. With MOTÖRHEAD, we've been working so hard, for so long."

MOTÖRHEAD frontman Ian "Lemmy" Kilmister, who celebrated his 70th birthday on Christmas Eve (December 24),learned two days later that he was afflicted with an aggressive form of cancer. He died two days later, on December 28, at his home in Los Angeles.