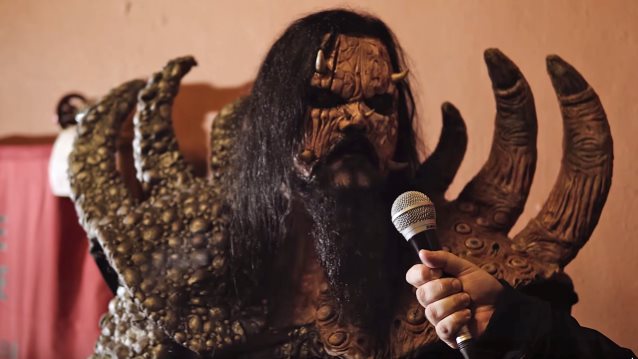 Andrew Epstein of Zombitrol conducted an interview with Mr. Lordi of Finnish monster metallers LORDI prior to the band's February 22 show at The Opera House in Toronto, Ontario, Canada. You can watch the full interview below. A few excerpts follow (transcribed by BLABBERMOUTH.NET).

On where the character of Mr. Lordi begins and ends for him:

Mr. Lordi: "The character is alive onstage. The characters are alive in the lyrics and musically, but it would be so stupid for me to [be Mr. Lordi all the time]. It sounds fucking stupid, isn't it? [Makes growling noise] I remember for the first two years or so, we were kind of still struggling with the whole thing with the management and the label back then as we were trying to think 'What is the best way to do it?' It was so stupid. I remember doing one radio interview with the 'Lordi' voice. It sounded so fucking lame. It's just stupid. It works for some, but I remember this old interview from, I think it was '74, [KISS bassist] Gene Simmons, doing his first TV appearance and it is quite…it didn't work when he was trying to be the bat monster. The same thing; it works for only a few. I cannot name any names that being in the character would work. I mean, come on, let's face it: Everybody knows there's a human inside the costume. [Laughs]"

On whether LORDI turned down a proposal from late GWAR frontman Dave Brockie (a.k.a. Oderus Urungus) for GWAR and LORDI to team up for co-headlining shows in Europe and North America where the two bands would do "battle" onstage.

Mr. Lordi: "Yes, that's true. The problem was that, well actually it was our management and us also, and the label. The thing is that the two bands, even though the only thing that we share is the thing that we dress up as monsters. The problem was that the whole 'battle' thing. We felt uncomfortable with the whole idea to, you know, 'play that game.' First and foremost, we are a band. We're a rock band, hard rock band, heavy metal band if you will, and that's it. Yeah, I mean we dress up as monsters, our image is monsters, but that's where the buck stops. It wouldn't have been comfortable. It was a nice idea to some extent, but not really. We were really thinking about it. We were like 'mm-hmm,' but it wouldn't have worked with us, really."

On why LORDI doesn't pretend to be monsters, even in costume:

Mr. Lordi: "That would be so stupid, to try and hide the personality. It comes through every time I open my mouth. My personality comes out when I'm on stage, too. It's a little bit different, but it's still me. The same goes with every band member, past and present. You cannot really fake this and I know it sounds kind of weird coming from a guy who dresses up like this. But you cannot really fake it, you have to be yourself. You have to feel comfortable with this shit, you know, and you really have to believe in this shit. You have to be true."

On whether LORDI has to put in extra work to maintain the fans they originally earned after winning the 2006 Eurovision Song Contest:

Mr. Lordi: "Here [in North America], it is so heart-warming. It's been nine years since the last time we've been to the States. This is our first time in Canada. It is so heart-warming to see those people are wearing the shirts from Ozzfest with the TYPE O NEGATIVE tour or LIZZY BORDEN tour, they're wearing those same shirts going, 'We waited nine years!' Yeah, there are definitely fans, not only here in this continent, but also in Europe that are still the old die-hard fans. But those who got into us through the mainstream and especially through Eurovision, I would say more than half of those people are gone because that's what the mainstream does. It's like there's a flash in the pan, then 'Next!' It takes a year, a year and a half, then 'Next!' That's what it is. The mainstream media, or if you're the 'hot shit' of the moment in pop media, it doesn't matter what your musical style or what your genre [is]. It doesn't really matter. If you're the hot shit for the moment, you will not be the hot shit tomorrow or anymore. It's weird to say, I'm kind of glad that those people are gone because I remember those days when we're playing at a festival, we come off the stage and I'm covered in blood and carrying severed limbs and chainsaws and shit and all that kind of stuff, and there are little kids, like four-year-olds, five-year-olds with their grandparents and they don't see anything. They're like 'Yeah! Eurovision! Yeah!' And they want to have autographs and photos. I felt, 'This is fucked up. People don't see what they're supposed to see. That is just so weird and wrong.'"

In the years following LORDI's Eurovision Song Contest victory, Mr. Lordi said he was unaware of GWAR, claiming the band was obscure in Europe. This prompted GWAR's Dave Brockie to rail against LORDI in the press, incredulous that LORDI was unaware of GWAR in spite of the obvious similarities between the two bands.